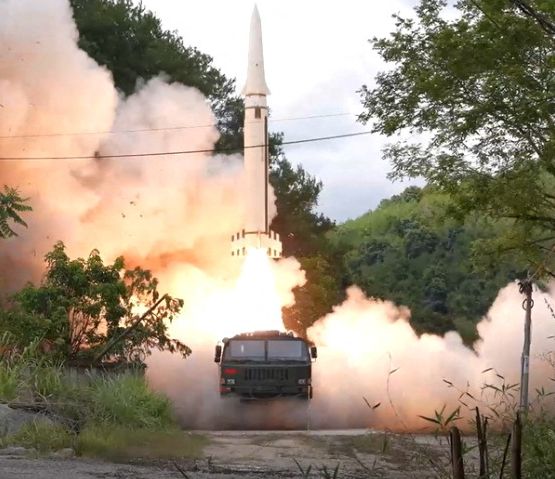 The PLA conducts missile tests into the waters off the eastern coast of Taiwan. File

In its first comments on the Taiwan crisis, India on Friday said like many other countries, it too was concerned over the recent developments. At the same time, India refused to explicitly endorse the ‘one- China’ policy that Beijing has been prodding countries and even the UN to reiterate.

“We urge the exercise of restraint, avoidance of unilateral actions to change the status quo, de-escalation of tensions and efforts to maintain peace and stability in the region,’’ said the Ministry of External Affairs (MEA) spokesperson Arindam Bagchi. The Indian appeal for restraint came even as 24 Chinese aircraft and six vessels were detected by the Taiwan Defence Ministry near its territory on Friday, two days after China halted its large-scale military drills near the self-ruled island on Wednesday.

We urge the exercise of restraint, avoidance of unilateral actions to change the status quo, de-escalation of tensions and efforts to maintain peace and stability in region. MEA

“India’s relevant policies are well-known and consistent. They do not require reiteration,’’ said Bagchi when asked to comment on the visit of US House Speaker Nancy Pelosi to Taiwan as well as whether India endorsed the ‘one-China’ policy advocated by Beijing that does not see Taiwan as a separate country. At a recent press conference, the Chinese foreign office spokesperson Wang Wenbin said more than 170 countries and many international organisations had reiterated their ‘one-China’ commitment. This means that India is among the two dozen countries that have resisted explicitly announcing that they continue to endorse the ‘one-China’ commitment after the eruption of the Taiwan crisis.

The MEA’s call for avoidance of unilateral actions to change the status quo comes after China mounted aggressive naval drills around Taiwan amid concerns that it may attempt to occupy its outermost shoals and islets.

Wang, commenting on Friday on Pelosi’s latest remarks, said they are “further proof that her visit to China’s Taiwan region shows connivance and support for Taiwan independence separatist forces. She openly referred to Taiwan as a country. This is a serious political provocation that violates the one-China principle and the three Sino-US joint communiqués.”

Taiwan has alleged that China used military exercises as a practice to attack the country in future. The US has been steadfast in its outreach to Taiwan in the face of increasing Chinese hostilities and reassuring Taipei of its continued support.

In response to another question, Bagchi said India has no plans as of now to evacuate the 10,000-odd Indians living in Taiwan.