Civil Aviation Minister announces Rs 10 lakh interim relief for each of the deceased, Rs 2 lakh for the seriously injured and Rs 50,000 for those who suffered minor injuries 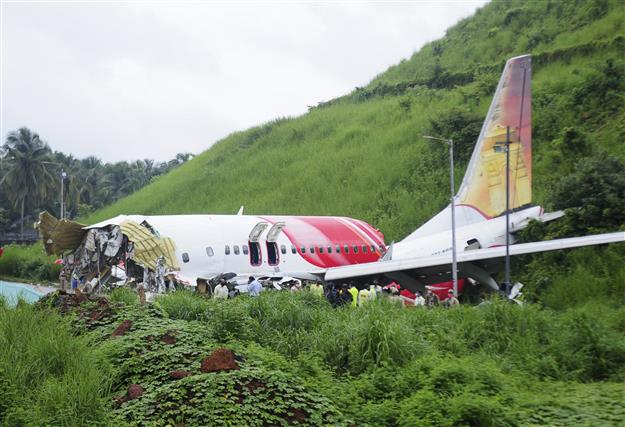 Officials stand on the debris of the Air India Express flight that skidded off a runway while landing in Kozhikode, Kerala on Saturday, August 8, 2020. PTI Photo

The black box of the ill-fated Air India Express flight that could throw light on how it overshot the runway here and crashed has been recovered while the toll in the mishap rose to 18 on Saturday with a passenger succumbing to injuries, officials said.

Hours after the AIE flight with 190 people on board overshot the tabletop runway at the airport here while landing in heavy rain and fell into a valley 35 feet below and broke into two portions on Friday night, investigations into the cause of the mishap are underway with top officials of the airlines and aviation regulator DGCA rushing here.

As authorities launched investigations into the crash that also left scores injured, Civil Aviation Minister Hardeep Singh Puri also arrived here to take stock of the situation and implementation of the relief measures.

Pilot of crashed Air India Express flight one of the most experienced: Hardeep Singh Puri

10 years ago, AI Express plane went up in flames after overshooting runway at Mangalore airport

My heart goes out to the families & friends of the 18 people who lost their lives in the air accident involving @FlyWithIX Flight IX-1344 in Kozhikode last evening & offer my heartfelt condolences.

Reasons for the mishap are being investigated. pic.twitter.com/awEGpU9EmK

The Minister said he would hold consultations “with senior civil aviation officials and professionals”, adding reasons for the mishap were being investigated.

An official of the Directorate General of Civil Aviation (DGCA) said the DFDR and CVR are with the Aircraft Accident Investigation Bureau and would be sent to Delhi for further investigation.

Puri also announced Rs 10 lakh interim relief for each of the deceased, Rs 2 lakh for the seriously injured and Rs 50,000 for those who suffered minor injuries.

Malappuram District Collector K Gopalakrishnan said one more passenger succumbed to injuries, taking the toll in the civil aviation mishap in Kerala to 18.

Barring one, all those who had perished in the accident had been identified, he told reporters.

The condition of 16 passengers among 149 admitted to various hospitals is serious, he said.

Amid the tragedy, coronavirus scare, too, surfaced with samples of one of the passengers who died in the mishap testing positive for the pathogen with state Health Minister KK Shailaja asking all those engaged in the rescue operations to go on self-quarantine as a precautionary measure and get themselves tested.

Minister of State for External Affairs V Muraleedharan, who arrived here in the morning from New Delhi on the directive of Prime Minister Narendra Modi, was briefed by the officials of Air India and Airport Authority of India (AAI) on the accident, that claimed the lives of both the pilots.

“Visited the crash site at #Calicut Airport. Officials of @airindiain and AAI briefed on how the accident had occurred. The investigation is on to ascertain various aspects of the crash,” Muraleedharan said in a tweet.

It also said three relief flights had been arranged to assist passengers and their family members affected in the accident that also brought back memories of the crash of Air India Express flight IX 812 on May 22, 2010, at Mangaluru International Airport.

The flight from Dubai had overshot the runway and plunged down the cliff into a wooded valley, killing 158 people.

As top officials rushed here for investigations, it emerged the aviation regulator had issued a show-cause notice to the director of the Kozhikode airport on July 11 last year after it found “various critical safety lapses”.

The DGCA had pointed to cracks on the runway, water stagnation and excessive rubber deposits among other lapses in its show-cause notice, an official said.

It had conducted the inspection after an Air India Express flight coming from Dammam in Saudi Arabia had a “tail strike” while landing at the airport here on July 2 last year, the official said.

Air India tweeted that its Chairman and Managing Director Rajiv Bansal, and Air India Express Chief Executive Officer K Shyam Sundar and others “rushed” to the accident site “to take stock of the situation and are being briefed by experts”.

Two special relief flights had been arranged from Delhi and one from Mumbai for rendering humanitarian assistance to all the passengers and the family members, Air India Express, a wholly-owned subsidiary of the national carrier, said.

“The Emergency Response Director is coordinating with all the agencies in Calicut (Kozhikode), Mumbai as well as Delhi, Dubai for effective emergency response,” it said in a statement. PTI