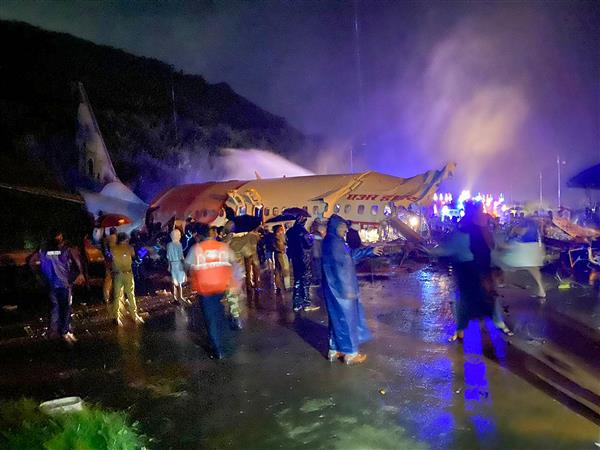 The Air India Express flight that skidded off a runway while landing at the airport in Kozhikode, Kerala, on Friday, August 7, 2020. AP/PTI

A deadly combination of a slippery runway, strong tailwind, bad weather conditions, and landing ahead of the threshold spot could have resulted in the skidding of the ill-fated Air India Express in Kozhikode that claimed 18 lives, two aviation experts said on Saturday.

An Air India Express aircraft flying in from Dubai skidded off the runway while landing at Kozhikode on Friday evening and plunged into the deep valley below. At least 18 people were killed, including two pilots, and hundreds injured.

The aircraft carrying 190 persons, including six crew members, battled heavy rain while landing at 7.41 pm on Friday, and careered off the runway after landing at the table-top airport.

“It may be due to lack of friction between the tyres and the runway. There may be the factor of hydroplaning due to waterlogging,” a pilot not wanting to be quoted told IANS.

Hydroplaning is a condition in which presence of water causes a moving wheel to lose contact with the load-bearing surface, the runway in this case. This makes braking or manoeuvring of the vehicle (plane), impossible. Hence, the aircraft’s speed could not be reduced after landing, the pilot said.

Speaking to IANS, a former Indian Air Force (IAF) navigator pointed out that the standard 9,000-feet Kozhikode runway is not an issue for this kind of aircraft.

“Probably, the pilot landed ahead of the threshold or the usual spot, owing to bad visibility, strong tailwind, and a slippery runway—all odds were stacked against him,” the former navigator said.

“With a reduction in distance available to bring the plane to a halt, the pilot would have to literally sit on the brakes with full reverse engine power. The ditch at the end of the runway must have been on his mind. The slippery runway seems to have done the rest,” he added.

According to him, it was “bad luck” and perhaps “error of judgement” on part of the pilot that led to the tragedy. — IANS