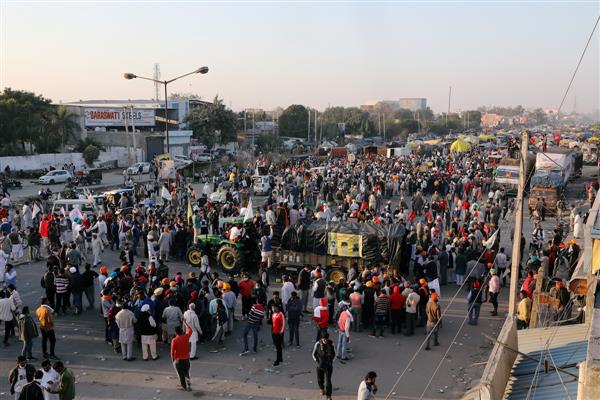 Protesting farmers have expressed apprehension that the new laws would pave the way for eliminating the safety cushion of Minimum Support Price. Reuters photo.

A decision on the government's offer for fresh talks to resolve the deadlock over contentious farm laws is likely to be taken later in the day by protesting farmer unions who urged people on Wednesday to skip one meal on 'Kisan Diwas', the birth anniversary of former prime minister Chaudhary Charan Singh, in support of their stir.

Several farmers visited 'Kisan Ghat' here on Wednesday morning to pay tributes to Chaudhary Charan Singh, who was known for his farmer-friendly policies.

"Several farmers arrived here at Kisan Ghat to pay their tribute on the occasion of Kisan Diwas. They are paying tributes and leaving soon after," a police officer said.

Farmer leader Kulwant Singh Sandhu had said that 32 farmer unions from Punjab held a meeting on Tuesday and discussed the next course of action.

A meeting of farmer leaders from across India would be held on Wednesday where a decision on the government's talks offer will be taken.

In a letter to 40 union leaders, the Joint Secretary in the Union Agriculture Ministry, Vivek Aggarwal, had on Sunday asked protesting farmer leaders to specify their concerns over its earlier proposal of amendments in the laws and choose a convenient date for the next round of talks so that the ongoing agitation could end at the earliest.

Agriculture Minister Tomar said on Tuesday he is hopeful that protesting unions would soon complete their internal discussions and resume talks with the government to resolve the crisis.

The farmer leaders will also observe "Shaheedi diwas" from December 23-26.

Traffic remained disrupted in bordering areas of the national capital due to the stir.

The Delhi Traffic Police said the Chilla and Ghazipur borders are closed for traffic coming from Noida and Ghaziabad to Delhi. It has advised people to take an alternate route for coming to Delhi via Anad Vihar, DND, Apsara and Bhopra borders.

Singhu, Auchandi, Piau Maniyari, and Mangesh borders are also closed and commuters have been advised to take routes through the Lampur, Safiabad and Saboli toll tax borders.

Police said that as traffic has been diverted from Mukarba and the GTK road, people are suggested to avoid Outer Ring Road, the GTK road and National Highway (NH) 44.

Those travelling to Haryana can go through the Jharoda (only single carriageway), Daurala, Kapashera, Badusarai, Rajokri NH-8, Bijwasan-Bajghera, Palam Vihar and Dundahera borders.

According to the traffic police, Tikri, Dhansa and Ghazipur borders are also closed for traffic but the Jhatikara border was open only for two-wheelers and pedestrians.

Enacted in September, the three farm laws have been projected by the central government as major reforms in the agriculture sector that will remove the middlemen and allow farmers to sell anywhere in the country.

However, the protesting farmers have expressed apprehension that the new laws would pave the way for eliminating the safety cushion of Minimum Support Price and do away with the mandi system, leaving them at the mercy of big corporates.

The government has repeatedly asserted that the MSP and Mandi systems will stay and has accused the opposition of misleading the farmers. PTI

Fire breaks out in Delhi's Kirti Nagar, no causality