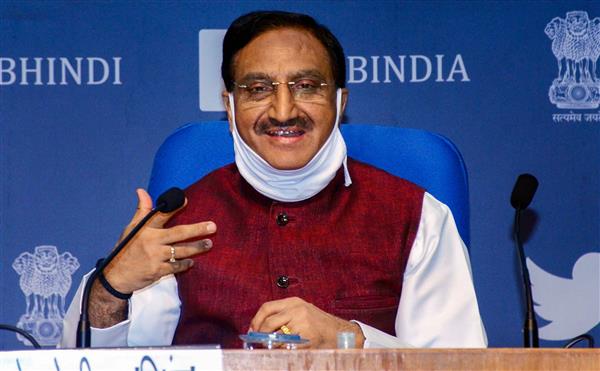 Education Minister Ramesh Pokhriyal on Friday said the National Education Policy 2020 was the first India-centric education policy since Independence and would lay the foundations for the development of strong citizens rooted in their culture but trained to take on global competition.

Pokhriyal was speaking at the event of the virtual launch of a new building of Karnal Regional Centre of the Indira Gandhi National Open University here on Friday.

The centre set up in 1991 is disseminating distance education to over 83,000 students in remote areas of Haryana through 32 study circles at present, the Minister said.

He said the Karnal Regional Centre would take forward the agenda laid out by the NEP 2020, which is aligned with Prime Minister Narendra Modi’s pledge to make India a $5 trillion dollar economy by 2025.

“The NEP 2020 is the first India-centric education policy since Independence. It has room for cultural values and inventions, for knowledge and science, for and education,” said the Education Minister noting that the Policy would lay the foundations for a new and prosperous India.

Hailing Haryana for reaching education in distance mode to thousands of students, Pokhriyal said 70 per cent students receiving distance education through Karnal Regional Centre of IGNOU in Haryana were from rural areas, of which 30 per cent were girls.

He said the Karnal centre would get a chance to roll out NEP 2020 which aims to create students to build a self-reliant India.

“The new policy has the capacity to create a world-class citizen,” said the Minister.