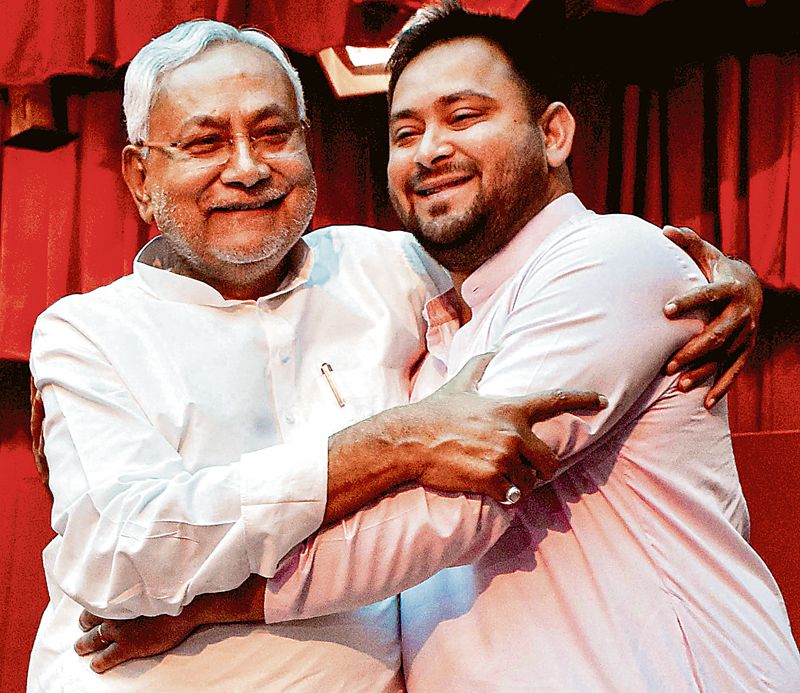 Janata Dal (United) supremo Nitish Kumar, who today took oath as Chief Minister of Bihar for a record eighth time, stressed the merits of “Opposition unity” and dismissed speculations that he was a contender for the post of Prime Minister. At the same time, however, Nitish threw an open challenge to PM Narendra Modi (though without naming him) after the swearing-in ceremony.

“Those who came to power in 2014, will they be victorious in 2024? I would like all (Opposition parties) to be united for 2024. I am not a contender for any such post,” he told mediapersons. Five years after Nitish resigned and walked out of the RJD-JD(U)-Congress ‘Mahagathbandhan’, accusing the Lalu Prasad Yadav family of “corruption”, he and RJD leader Tejashwi Yadav were sworn in as Chief Minister and Deputy CM, respectively, by Governor Phagu Chauhan.

BJP leader Sushil Kumar Modi alleged Nitish Kumar wanted to become Vice-President and he dumped the BJP after the party failed to accommodate his ambitions.

Nitish had 117 MLAs in 2010, 72 in 2015, and now 43. Many political commentators say his image is teflon-coated. The numbers don’t show that. —Prashant Kishor, Poll strategist

Today, as he repeatedly spoke of “working towards Opposition unity”, Nitish emphasised that he was “not a contender for anything”, in other words the PM. However, power corridors are abuzz with talk that his move to dump the BJP and start afresh with the RJD had in mind the larger picture and the fact that it was “now or never”. Though many, including former ally BJP as also his former associate Prashant Kishor, believe he does not have it in him anymore.

On whether Nitish continues to be as popular as he was five years ago, Kishor has reportedly said: “If you look at the hard facts, there is a huge difference. In 2010, he had 117 MLAs, five years later he had 72, and now 43. Many political commentators say his image is teflon-coated. The numbers don’t show that.” Nitish has rubbished the BJP’s claim that the new government will not last its full term, saying that his former ally “will be back where they were after the 2015 Assembly elections”.

Elections in Bihar are due in 2025, a year after the Lok Sabha poll. Amid speculation that they may be advanced to 2024, observers say the coming together of the JD(U) and the RJD will “help consolidate Muslim, OBC and Dalit votes in favour of the Mahagathbandhan and limit the BJP to 10-12 seats in the Lok Sabha”. The Bihar unit of the BJP currently has 17 of the 40 LS seats.

While speculation is rife that Opposition parties could rally around Nitish, the question, however, is if they all will be willing to stick to the plan once the euphoria of “the BJP being given the taste of its own medicine” gets over.

Nitish is one of the many, including West Bengal CM Mamata Banerjee, Telangana CM K Chandrashekar Rao and Rahul Gandhi, who are harbouring prime ministerial ambitions. However, the fact that the JD(U) leader has been able to align with parties with varied ideologies is indicative of his political flexibility and acceptability, say observers.

Meanwhile, the Mahagathbandhan has brought a no-trust motion against Speaker Vijay Kumar Sinha of the BJP.