Singer was to tie knot in June with a Bhawanigarh village girl, currently settled in Canada 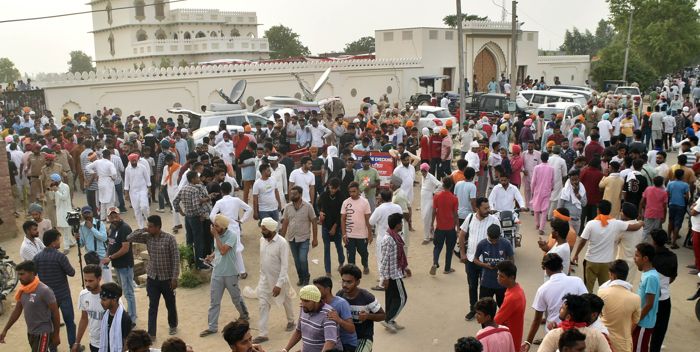 A day after the fatal shooting of singer and Congress leader Sidhu Moosewala, the post-mortem examination was conducted on the body by a board comprising five doctors at the Civil Hospital, Mansa, amid tight security. Sources say over 25 bullet wounds were found on the singer’s body.

As per information, a forensic expert each from the Faridkot medical college and GMC, Patiala, along with three doctors from the Mansa hospital conducted the post-mortem.

A doctor told The Tribune Moosewala suffered 25 bullet wounds on the body. Injuries to the left lung and liver led to the death. The right elbow was shattered, while maximum bullets wounds were sustained in the chest and abdomen. Two bullets hit the right leg.

Earlier in the day, Moosewala’s family refused to allow post-mortem, following which district administration officials met them at their house.

Moosewala’s father Balkour Singh submitted a letter for CM Bhagwant Mann demanding a probe from a sitting High Court judge, inclusion of the CBI and NIA into the probe and a public apology from the DGP for linking the killing with gang war, which were accepted by CM Bhagwant Mann. The DGP later gave a clarification. Around afternoon, the district administration brought Moosewala family to the Civil Hospital and a post-mortem was conducted. The cremation will take place tomorrow. The police have started a probe into the incident. Experts from the Forensic Science Lab, including Deputy Director Dr Ashwani Kalia and SS Sahota, inspected Moosewala’s vehicle. They also inspected a vehicle abandoned by the assailants after the attack.

Fearing threat to Sidhu Moosewala life, his father Balkour Singh went behind the singer after he left the house without a bulletproof car and security men. In a statement to the police, Balkour claimed his son got extortion threats. When he reached Jawaharke village, he saw a car trailing Moosewala’s vehicle. “After his son took a turn towards Barnala village, a Bolero with four youths stopped in front of his son’s Thar,” said the FIR. The occupants of two cars opened indiscriminate fire at his son and fled. TNS

Singer was to tie knot in June

Sangrur/Mansa: Singer Sidhu Moosewala was set to tie the knot in June. He was engaged to a girl from Sargheri village in Bhawanigarh subdivision of Sangrur, currently settled in Canada. Preparations were on in both families and the girl had arrived for the wedding. In January, his mother had said: “A little more time, then he will no longer be single. We have started preparations for his wedding, which will happen after this year’s (Assembly) elections.” Before he rose to fame, Moosewala had lived in Canada for some time. TNS