Free travel for women in govt buses | 48,989 vacancies to be filled

In the run-up to the Assembly elections expected early next year, Punjab Finance Minister Manpreet Singh Badal today presented a please-all but deficit Budget with an outlay of Rs 1,38,015 crore and focus on welfare schemes. No new taxes were announced.

The state will incur an additional debt of Rs 20,823 crore in the 2021-22 fiscal on account of the populist schemes, including Rs 9,000 crore for implementing the Sixth Pay Commission recommendations, filling 48,989 vacancies and free transportation for women and college students in government buses. There is a provision for assured buy-back of potato and kinnow, doubling of social security pensions and Rs 11,000 crore for free power to various sections. Manpreet dedicated the Budget to the farmers and set aside Rs 17,051 crore for agriculture-related schemes. The state’s outstanding debt is estimated to reach Rs 2,73,703 crore by next March, an increase of over Rs 91,000 crore since the Congress government took over in March 2017. 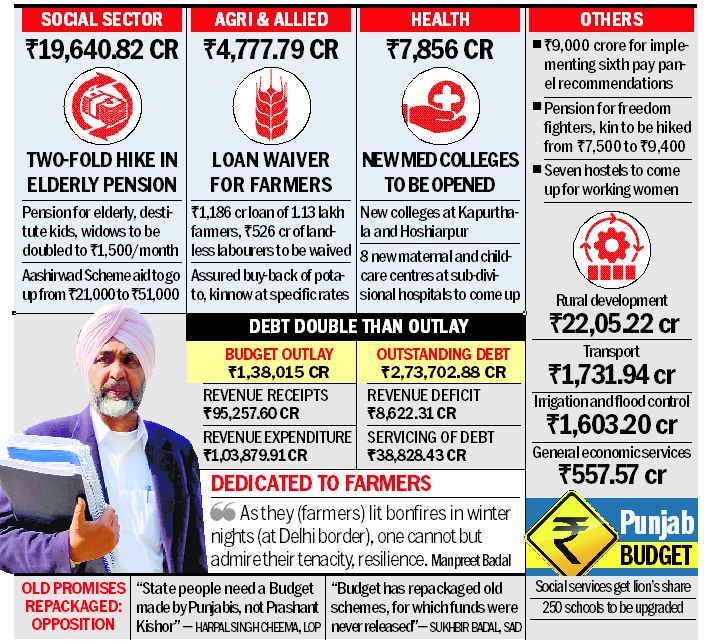 The state will raise Rs 35,041 crore as loans and spend Rs 38,828.43 crore in servicing its debt. Brushing this aside, Manpreet said his Budget proposals had ensured the welfare policies reached out to the lowest rung of the society. Blaming the high debt liability in the current year to a Covid-induced slowdown, he said the schemes would benefit the socio-economically disadvantaged sections and farmers.

Loans worth Rs 1,186 crore of 1.13 lakh farmers and Rs 526 crore of landless farm labourers will be waived in the coming year. A sum of Rs 300 crore has been set aside for cane growers while several new agriculture and horticulture research and innovation centres are proposed to be set up. A new scheme, “Kamyaab Kisan Khushaal Punjab”, worth Rs 1,104 crore has been announced.

An unprecedented 62 per cent of the allocations (Rs 19,640.82 crore) have been made for the social sector wherein the social security pension for all elderly, destitute children and widows has been doubled from Rs 750 to Rs 1,500 per month. Under the Aashirwad Scheme, the assistance has been increased from Rs 21,000 to Rs 51,000, requiring an outlay of Rs 250 crore. Both the measures had been announced by the Congress in its poll manifesto in 2017 and the government had repeatedly drawn flak over these promises not being met.

Even as the two Akali Dal MLAs walked out over the inability of the government to enhance compensation for families of farmers who had died by suicide, and later by AAP MLAs over Punjab’s rising debt, the Finance Minister continued to rain sops like enhancement of pension for freedom fighters and their kin from Rs 7,500 to Rs 9,400, among others.

Emphasis has also been on upgrading school and higher education infrastructure; besides seven hostels for working women; additional grants to universities, including Punjabi University to see it come out of the red; urban infrastructure; repair and maintenance of water resources; upgrading roads in rural areas; among other sops. No direct sops have been announced for trade and industry hit hard by the pandemic, though some new policies have been announced.