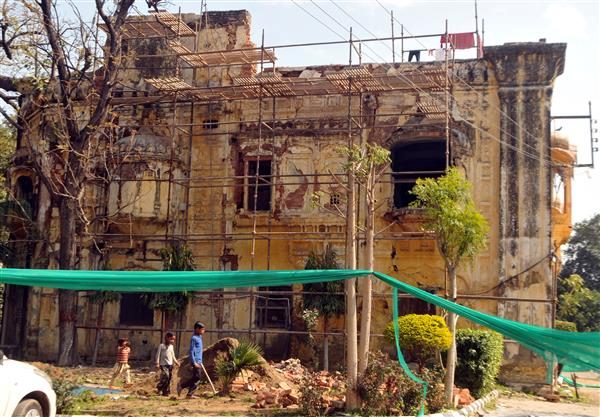 Finally, the miserable condition of centuries-old “deori” (entrance gateway) located in the historic Ram Bagh, has caught attention of the authorities concerned.

Though, the possession of this priceless part of the summer palace of Sikh ruler Maharaja Ranjit Singh, was officially with the Amritsar’s Municipal Corporation (MC), yet its restoration was being done by the Archaeological Survey of India (ASI).

Two “deoris”, one on the southern end and another on the northern end of the Ram Bagh complex, were built in 1831. The southern “deori” was properly conserved, having “jallis” of the baradari atop the building, fortified citadel, two pavillions and beautiful balconies on the outer wall. It’s currently under the control of the ASI which runs its office from the premises.

However, the “deori” on the northern end has been in a shambles. The projected balconies that were once decorated with ornamental floral designs in lime plaster have fallen and cracks have surfaced on the façade.

Ironically, this historical structure was in the occupation of one of the three British-era clubs, running on the Ram Bagh complex for nearly a century, and was being “misutilised” as a store and an office. It was vacated only in December 2018 when a high profile ASI team led by TR Sharma, Regional Director, ASI (North India), along with the MC officials intervened. An official on condition of anonymity said, “The delay in its preservation was due to Covid-induced lockdown, followed by the time-consuming exercise to get the official nod for carrying out the restoration work from the ASI’s higher authorities.”

He said after furnishing all formalities, the conservation and renovation of this ancient “deori” has been undertaken. The project costing approximately Rs 17 lakh would be completed within one-and-a-half month.

“Expert artisans have been engaged to restore its glory. The major challenge is to restore its originality. With utmost care, its façade will be stiffened with special material and cracks will be filled up. Projections, parapets and balconies, will be refurbished as per the original design,” he said. The ASI would also initiate a proposal to procure its possession from the MC, which is the custodian of the Ram Bagh, and several structures located in it.

As per an agreement, the ASI would take care of preservation of the historic structures only.