Resolution expresses faith in his leadership 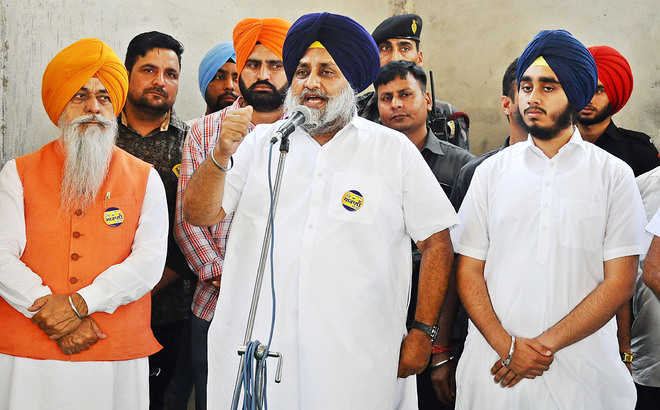 The SAD president, who interacted with district presidents yesterday and today, besides the senior leadership, said: “The party and its well being are supreme for me. I have always acted in the best interest of the party. I own moral responsibility for the party’s defeat in the Assembly elections and am ready to step down as party president”.

The SAD leadership however shot down his offer in unison with many district presidents bringing the hard work and intensive election campaign led by Sukhbir on record. A formal resolution was also passed unanimously to express complete confidence in his leadership. Speaking on the issue, party leaders said not only did Sukhbir led from the

front but also inspired the party leadership as well as the cadre to give their best. The leaders said though the results were not as per expectations, the party president could not be faulted in any manner whatsoever.

“People voted overwhelmingly for change and the entire Opposition was swept aside in the resultant tsunami”. Asserting that all was not lost, party leaders said “the SAD has the ability to rise like a phoenix from the ashes and Sukhbir will play a lead role in this”.

In its worst-ever defeat in the 2022 Assembly elections since its inception, the SAD won only three seats out of 117. In the 2017 Assembly elections, the Akali Dal had to be content with 15 seats and the Bharatiya Janata Party with three.