A Relic of St. Philomena of Italy In India? 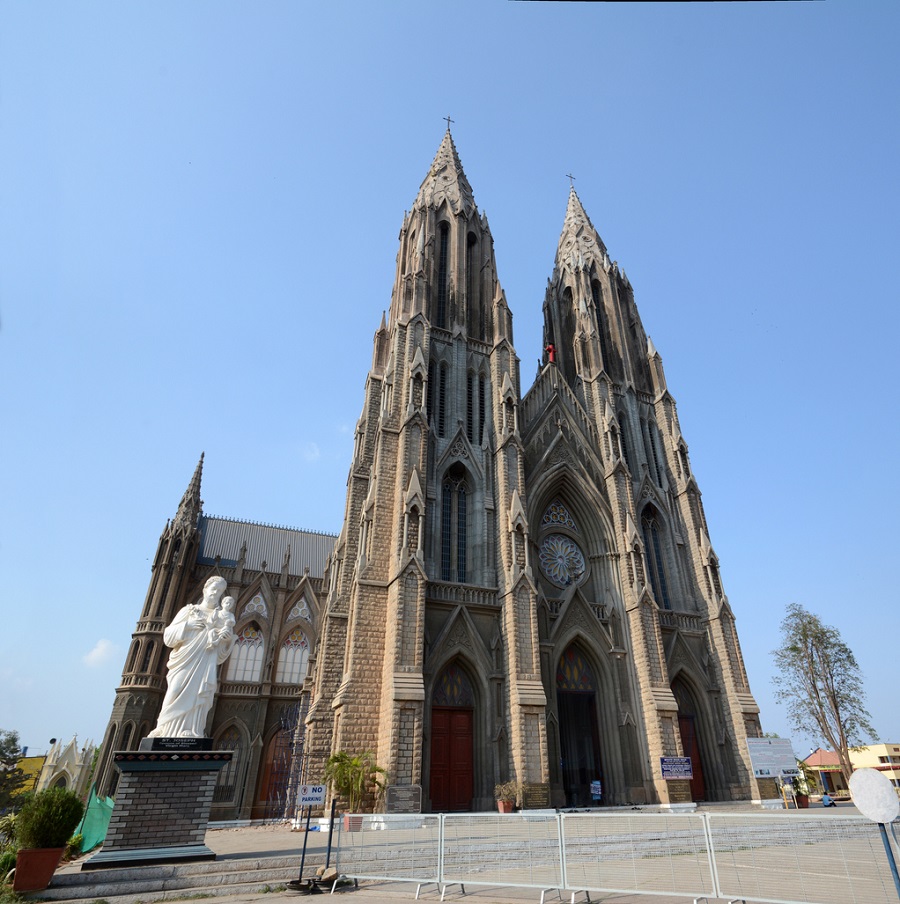 Yes! As you enter Mysuru from the Bengaluru side, there is no way you can miss the magnificent gothic-style church that immediately catches the eye. St. Philomena’s Church presents an imposing sight; the perfectly developed portals within the arched entrance and the slim sky-kissing twin spires are overwhelming.

This magnificent cathedral, one of the tallest in this country, was built in 1936. Following a neo-gothic style, its distinct stained glass windows and soaring towers could place this site of worship anywhere in the Western world.

But this cathedral has a secret that even most residents of Mysuru have no clue about! Even today!

What are the chances of a French statue and relic of a celebrated Greek saint from Italy, finding a place in a cathedral built on the likes of a famous cathedral in Cologne, Germany, and designed by a Frenchman, being located in Mysuru, India? This describes, in short, St. Philomena's Church!

Any of you readers who might have seen the Cologne Cathedral in Germany, or images of it, will see where the designer got his inspiration from.

Daly, an artist from France, is believed to have used the cross as the inspiration for the floor plan of St. Philomena’s Cathedral.

Although it is known all over the world as St. Philomena’s Church or Cathedral, its actual name is the Cathedral of St. Joseph and St. Philomena.

More seldom, it is referred to as St. Joseph’s Cathedral. With a seating capacity of 800 inside the mail hall, churchgoers can feast their eyes on the exquisite images on the stained glass windows of all the milestones in Christ’s life: His birth, the Last Supper, His Crucifixion, His Resurrection and His Ascension. The 175-foot-tall twin spires are an important landmark in the city's landscape.

Initially, over 250 years ago, there was a small church in its place. At that time, Srirangapatna was the capital of Mysore state and many British officers and soldiers used to live there.

However, once the capital was changed to Mysore city in 1799, many of them moved to settle in the capital.

The small church was too small for the growing congregation, so Maharaja Krishnaraja Wadiyar III earmarked a plot of land on the present Bengaluru-Mysuru road, where a small church was built. In time, that proved inadequate as well, as the city grew.

So plans were made to build a larger church and Maharaja Krishnaraja Wadiyar IV laid the foundation of the new church on October 28, 1933, which was to be built in the place of the small church built by his grandfather. After eight years of construction, the church started functioning in 1941.

The best-kept secret of this cathedral is the relic of St. Philomena from the 3rd century, which is in a beautiful underground catacomb below the main altar, lit with candles in front of the relics of the martyr.

The construction of the church was completed under Bishop Rene Fuga’s supervision.

At that time, Thamboo Chetty, who was the Huzur secretary to the Maharaja of Mysore, obtained a relic of the Saint in 1926 from Italy, and the following year, a new statue of St. Philomena was brought from France.

There are a number of churches dedicated to her all over the world. An annual feast is held on August 11 each year in all of them. The remnants of St. Philomena have been preserved in this church even today.

The monarch of Corfu, an island in Greece, had no children.

Distraught, he and his wife prayed incessantly for a child and even swore to convert to Christianity if their prayers were answered.

The very next year, a daughter was born to them. She was named Philomena, who started showing signs of being very religious from a very young age.

Corfu was at that time at loggerheads with Emperor Diocletian who was based in Rome.

The Emperor had threatened to declare war against the tiny island.

When Philomena turned thirteen, her parents decided to take her to Rome with them when they went to visit Emperor Diocletian to try and make peace with him.

When the Emperor saw Philomena, he was captivated by her beauty and wanted to marry her, much to the relief and pleasure of her parents. This was the only condition he gave them, to stop all aggression against Corfu.

Imagine their surprise when Philomena refused! She told her parents very firmly that she had promised to give her life to God. Her refusal made the Emperor furious.

Nothing could make young Philomena accept the offer of marriage — not Diocletian’s rage, nor her parents’ appeals. She had made up her mind.

The Emperor ordered that she should be imprisoned in the dungeons, hoping to make her change her mind under unendurable and fearful conditions.

For thirty-seven days, she was in the dungeon, which was followed by inhuman torture.

Just imagine a young girl of thirteen years enduring all this on her own!

She still did not budge! The Emperor’s men were then ordered to drown her, but that did not work either!

In desperation, the Emperor, feeling defeated and also afraid that her miracles would convince the masses of the virtues of Christianity, condemned her to death and she was beheaded in Rome.

HER TOMB IS DISCOVERED

During the 18th century, Europe faced revolution, war, famine, atheism and persecution. So, Christians were forced to perform the sacred rites of their religion in the underground caverns (crypts) that were on every side of Rome. These caverns were constructed at great expense by wealthy Christian families as places of burial.

During three consecutive centuries, the catacombs, as they are called, were also places where the faithful had their altars, and where they met to pray together.

Until the raids by the Goths and Lombards, during which caskets were plundered and often completely destroyed, the catacombs were used to bury saints and martyrs.

It must be noted that treasures were usually buried with the bodies of eminent people of that time. However, when peace returned, it was decided that the relics of popes and martyrs, which were still in the catacombs, would be removed to the safety of churches in Rome.

This endeavour started at the beginning of the 8th century, right up to the time of Pope St. Paschal, when the catacombs were finally emptied.

Or so, everyone thought.

Time passed, memories faded, the whereabouts of the catacombs were completely forgotten…until, quite by accident, they were discovered by a labourer on May 24, 1802. An excited group of priests, physicians and excavators went to the catacomb of St. Priscilla to open the tomb of the little martyr.

Her relics were then carried to Rome for safekeeping and then taken from there to Mugnano. A church was built for her in Mugnano, near Naples.

HOW SHE BECAME A SAINT

Since the discovery of her tomb in Rome in 1802, St. Philomena, martyred at just thirteen years of age, soon came to be recognized for her astonishing powers, mostly in curing incurable diseases. She is also known as the saint who 'brings joy to the sorrowful'.

On August 10, 1835, Pauline, a woman of great influence, who had been suffering from a supposedly incurable heart ailment, was suddenly cured at the St. Philomena’s shrine in Mugnano del Cardinale.

She was sure it had been a miracle and asked Pope Gregory XVI to begin the research required to proclaim Philomena (or Filumena) as a martyr saint. Almost two years later, after a thorough examination, Pope Gregory XVI declared St. Philomena as Patroness of the Living Rosary on 13 January 1837. A special feast day in her honour was declared too, along with a special Mass.

This is the only instance of a proper office being granted in honour of a saint from the catacombs, of whom nothing was known except her name and the fact of her martyrdom!

THE MAN BEHIND IT ALL

Bernard Trichinopoly Thumboo Chetty, known as T. Thumboo Chetty, entered the Mysore Civil Service in 1904 as an assistant commissioner. In 1914, when Chetty joined the palace administration, his efficiency impressed Maharaja Krishna Raja Wadiyar who appointed him as the assistant secretary in his personal staff in November 1914. 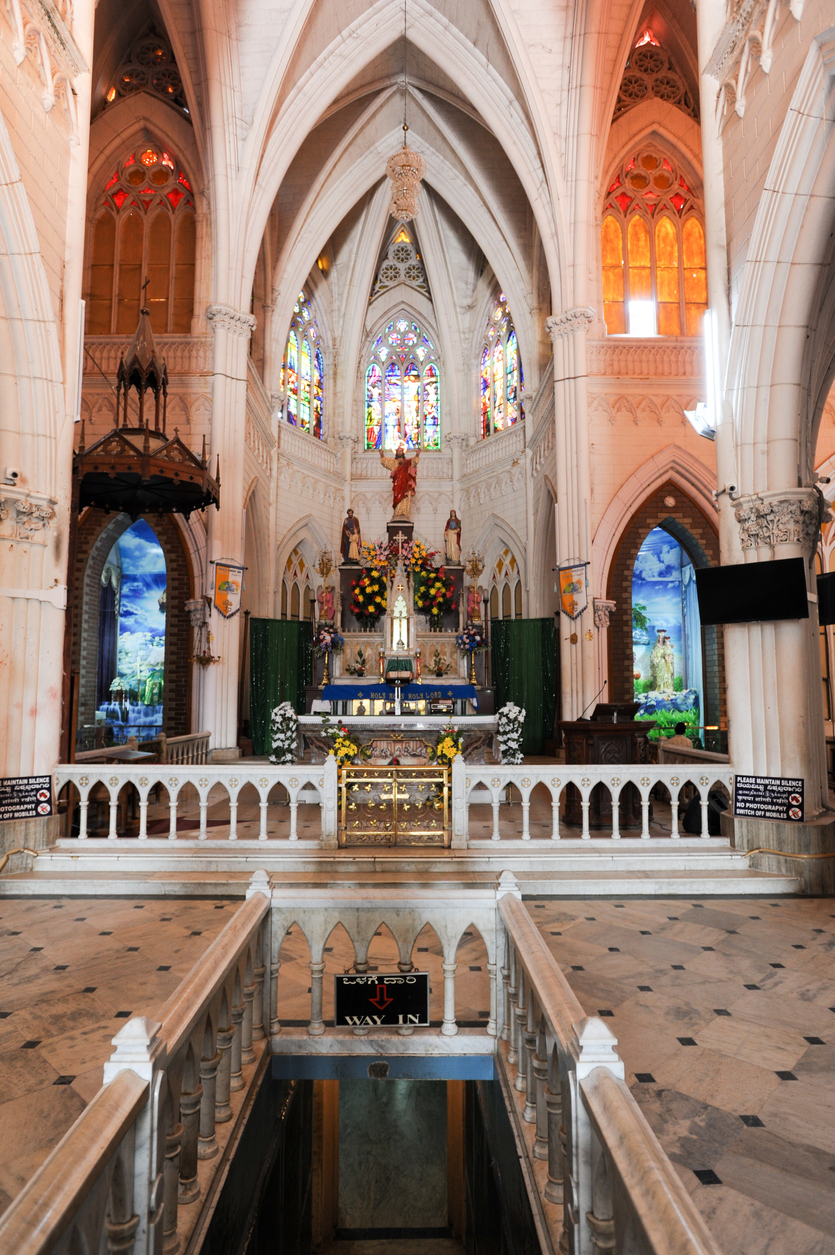 By 1922, T. Thumboo Chetty was the Huzur secretary to Maharaja Krishna Raja Wadiyar, who held Chetty in very high esteem and therefore, entrusted him with the entire responsibility of educating and training Sri Jayachamarajendra Wadiyar as the future ruler of Mysore. Chetty later became the private secretary to Maharaja Jayachamarajendra Wadiyar from 1942 to 1949, who, at his birthday durbar in 1942, bestowed upon Chetty one of the highest titles-Amatya Siromani.

ALL FOR A DAUGHTER…

One of T. Thumboo Chetty’s daughters was named Philomena by Reverend Father Jean-Bapiste Servanton, when she was baptized at St. Francis Xavier's Church, Bengaluru.

Even though Chetty knew that his daughter had been named after the famous saint, he did not know much about her or her miracles.

In fact, it was one of his brothers, a devout believer and follower of St. Philomena, who urged Chetty many years later, to try and acquire a relic of his favourite saint from Italy, by using his position.

He told him that the relics of St. Philomena were preserved not far from Mugnano.

So, in 1926, Chetty wrote to the Right Reverend Monsignor Peter Pisani, who had been the Delegate Apostolic of India for some years and was then living in Rome. He requested him to try and send him a relic of St. Philomena.

He waited for quite a while, but did not receive any reply. After a few months, Chetty went on a tour with the Maharaja to north India. While returning after visiting several places in the Himalayas, when they had made a stop in Benares, Chetty was surprised to receive a parcel from Rome. This packet had been redirected from place to place, following the royal party.

It contained a relic of the Saint, together with a certificate of the Bishop Augustine Zampini of Rome, testifying the genuineness of it and giving permission for the relic to be on public display so that all devotees could pray to it.

Chetty presented the relic to Reverend Father J. Cochet who was then in charge of St. Joseph's Church, Mysore. And, on October 10, 1927, the birthday of Chetty’s little daughter, the bishop of Mysore blessed the statue and the relic, and for the first time, let the public also witness them both.

T. Thumboo Chetty retired in 1949 after serving the Mysore Princely State for over forty-five years. He remained totally devoted to St. Philomena all his life. If it hadn't been for his audacious request, there was no way a precious relic from Italy would ever have been worshipped in a cathedral in Mysuru, was there?

Miracles do happen, they say! What do you think?