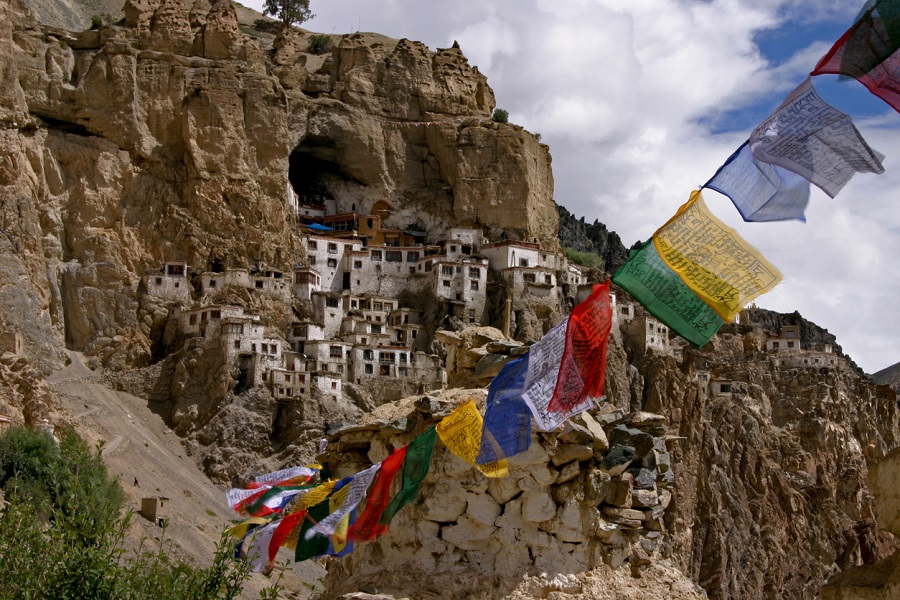 If you have visions of a monastery full of honeybee hives after reading the title, think again. There are no bees, no hives or honeycombs either!

What are being referred to are actually the windows of small, similar-looking constructions that seem like honeycomb from a distance!

All these constructions form the elusive Phugtal Monastery, situated high up on a mountain, overlooking the Zanskar Valley.

Imagine how the location must have been discovered! One can see why it is believed that sixteen followers of the Buddha were the first occupants of this natural cave — it lies in an obscure corner of the Zanskar Valley, majestically towering over all that it surveys at a height of about 3,800 metres.

At this secluded, rarefied spot, it would be so much easier to lead a calm and detached existence, right? Many, many monks followed suit over the centuries, arriving from far and wide, to meditate and lead a simple life in the midst of beauty and serenity in Ladakh. With so many senior monks in residence, student-monks followed them, to learn and benefit from their wisdom. The cave is believed to have been used for about 2,500 years by monks for meditation, way before the monastery was constructed.

Jangsem Sherap Zangpo is believed to have been born in 1395 in the village of Karma in Tibet. At the age of seven, he received vows from Deshin Shekpa, the fifth Karmapa

Sending five more disciples with Jangsem, Je Tsongkhapa gave him a statue of Amitayus to present to the king of Ladakh, requesting for his help in their mission. The statue contained the bone powder and a drop of Je Tsongkhapa’s blood. The king was a joyful recipient of the gift and instructed his minister to help Je Tsongkhapa’s disciples to set up a monastery in Ladakh. With  the  king’s go-ahead and help, Jangsem and his team set up a monastery called Lhakhang Serpo in Stagmo.

While he is also given credit for establishing the Phugtal Monastery, how that came about is quite fascinating. Three eminent scholars who also happened to be brothers —Dangsong, Pun and Sum — were believed to have the supernatural power of flight! Yes! They imparted teachings on dharma at Phugtal. When Jangsem Sherap Zangpo arrived  at  Phugtal,  the  three  brothers  gave  the holy site to him and left.

According to legend, the spiritually gifted Zangpo caused a spring to appear and flow from the cave, a tree to grow on top of the cave and for the cave itself to grow larger in size! Then, under his guidance, the structure of the monastery was built around the cave. It is built into the side of the cliff, like a honeycomb. The cliff is part of a lateral gorge of a major tributary of the Lungnak River. Zangpo died in 1457 at the age of sixty-two.

The name Phugtal (or Phuktal) comes from the words ‘Phug’, which means cave, and ‘tal’ or ‘thal’, meaning ‘at leisure’.

A second spelling of Phugtal is Phukthar; ‘thar’ meaning liberation according to the Zangskari dialect of the Tibetic languages.

So, what we have is the Cave of Liberation. Today, the Phugtal Monastery houses around eighty monks, a main temple, four prayer rooms, a library, a small clinic, numerous small residential houses, teaching facilities, a kitchen and the original cave with a protected sacred spring.

The frescoes in the prayer rooms are similar to the 11th-century ones of Alchi Monastery. The chorten (a Buddhist shrine, typically a saint’s tomb or a monument to the Buddha) here is believed to have the relics of its founder, Sherap Zangpo. By the way, the hollow in the rock above the monastery has flowing water that is believed to have mystical healing powers.

Phugtal Monastery is one of the few popular Buddhist monasteries in Ladakh that can be reached only by foot. The supplies to the monastery are brought on horses, donkeys and mules in summer,  and in the winter these are transported across the frozen Lungnak River by foot.

The clean waters of the Lungnak River, also known as the Tsarap River, flows to the valley below the Phugtal Gompa.

THE VILLAGERS AND THE MONASTERY

Phugtal Monastery has an amchi (Tibetan traditional physician) who provides natural Sowa-Rigpa medicine, prepared at the traditional Tibetan clinic in the monastery. Villagers come to see the amchi when there are health issues. He also visits nearby villages and offers medical assistance to the people in need. The monks from the monastery perform traditional prayers in the village during significant events like births, weddings, deaths, etc. There seems to be an invisible bond between the monks and the villagers.

Geshe Lharampa Nagri Choszed started the Phugtal Monastic School in 1993, with very few children. The demand obviously grew. So, the new Phugtal School was planned and completed in 2014 to provide education for the growing number of children in the Lungnak Valley close by. With no direct access to schools in other parts of Ladakh because of its remote location, the school was a much-needed boon to the villages there. The new campus had a boarding for students coming from further away, quarters for staff to reside in, a library, a kitchen — everything a present-day school should have, opening up the world of knowledge to the children living around the monastery.

Enrolment increased significantly. No fees were charged from the students and the monastery bore the cost of boarding, lodging and study material, with help from sponsors. A lot of the students were children from the local farming families in the Lungnak Valley, who were extremely poor. Complete education was provided, which involved a mix of traditional learning and a modern curriculum for grades 1 to 8. The school had an integrated curriculum that included natural sciences, social sciences, Hindi, English and written Tibetan (Bodhi). It also included traditional Tibetan subjects such as Tibetan Buddhist philosophy and Sowa-Rigpa medicine. As future members of the Phugtal Gompa, the students were trained in all aspects of monastic life too: prayers, rituals, festivals, hymns, etc. The teaching faculty consisted of Geshes, the

On December 31, 2014, a landslide occurred between the Shun and Phugtal villages, which caused a natural dam to form on the Zanskar River. The 10-km-long lake that formed behind the dam slowly increased in length and height without anyone noticing. By the time it was noticed and steps were taken to avoid flash floods, it was too late. On May 7, 2015, the dam burst, the Zanskar River flooded and the entire school campus was washed away! So many years of slow, hard work, gone. The building, equipment, materials and stores were all destroyed. How tragic that the new facility had functioned for barely four months. Fortunately, about forty to fifty families had been moved away, so no lives were lost. But, about six bridges, many, many homes and other buildings were washed away.

Rebuilding is what has been going on ever since the floods in 2015. From scratch! The rebuilding of homes, roads, bridges, and of course, the school. Very, very slowly. The monks of the Phugtal Monastery could do with some help, right? Anyone listening?

FESTIVALS AT THIS GOMPA

Like in all Buddhist monasteries, Phugtal Gompa celebrates Tibetan festivals with gusto. A lot of importance is given to the planning and execution of the traditional customs required for each festival. After all, the festivals give the villagers something to look forward to and emulate, and the monks a chance to mingle with their congregation. Each year, the Phugtal Monastery’s calendar of festivals starts around the end of February. The dates of the festivals differ each year.

The festival that commemorates the death anniversary of Je Tsongkhapa, the founder of the Gelug branch of Tibetan Buddhism, is held in early December. It is called Gadam Nagchod, or the Lightning Ceremony.

Monlam Chenmo, the most significant ceremony of the year, is celebrated at the beginning of the new year. Special rituals are performed for the well-being of people and for world peace.

Chonga Chodpa is celebrated just after the Chudsum Chodpa. The monks from Phugtal Monastery make a special statue of their deity from flour and butter,  which  is worshipped by the villagers.

Gyalwe Jabstan is celebrated after Chonga Chodpa, dedicated to the long life of the fourteenth Dalai Lama.

Ready for a donkey ride? Or, maybe a ride on a horse is okay by you? No? Then, walk. For, these are the only three ways to get to the Phugtal Monastery. A few hours’ drive from the town of Padum in Zanskar will take you to the road towards the monastery. Newcomers are advised to get properly acclimatized in Padum, a necessity to undertake any high-altitude trek. It takes a tough, arduous trek of two or three days to reach this isolated monastery, which appears to be miraculously glued on to the side of the vertical rock face. There are several inscriptions and stupas (chortens) on the way.

Visitors can go through the Padum- Manali trekking route to reach the monastery too. Cha and Anmu are the two villages situated near Phugtal Monastery. Cha is one of the most remote villages in Ladakh. To get there, a drive on paved roads from Leh to Kargil, followed by an equally long journey on unpaved roads to Padum, a town in the Zanskar region, is required.

The landscape of this region of Ladakh looks straight out of an exotic storybook! Trekkers often halt at one of these villages on their journey to Phugtal Gompa. Green patches of land surrounding the two villages show signs of civilization, a stark contrast to the barren landscape on the opposite side. Moonscape is what that kind of terrain is referred to, right? But once there, a visitor gets a unique insight into the lives of Buddhist monks, greeted by humble hosts who are happy to share their healthy food and hot tea. For trekkers or lovers of remarkable architecture, Phugtal Monastery is the place.