The Hanging Pillar of  Veerabhadra Temple

A 20 ft-tall, solid granite pillar defies gravity and hangs from the ceiling of this ancient temple 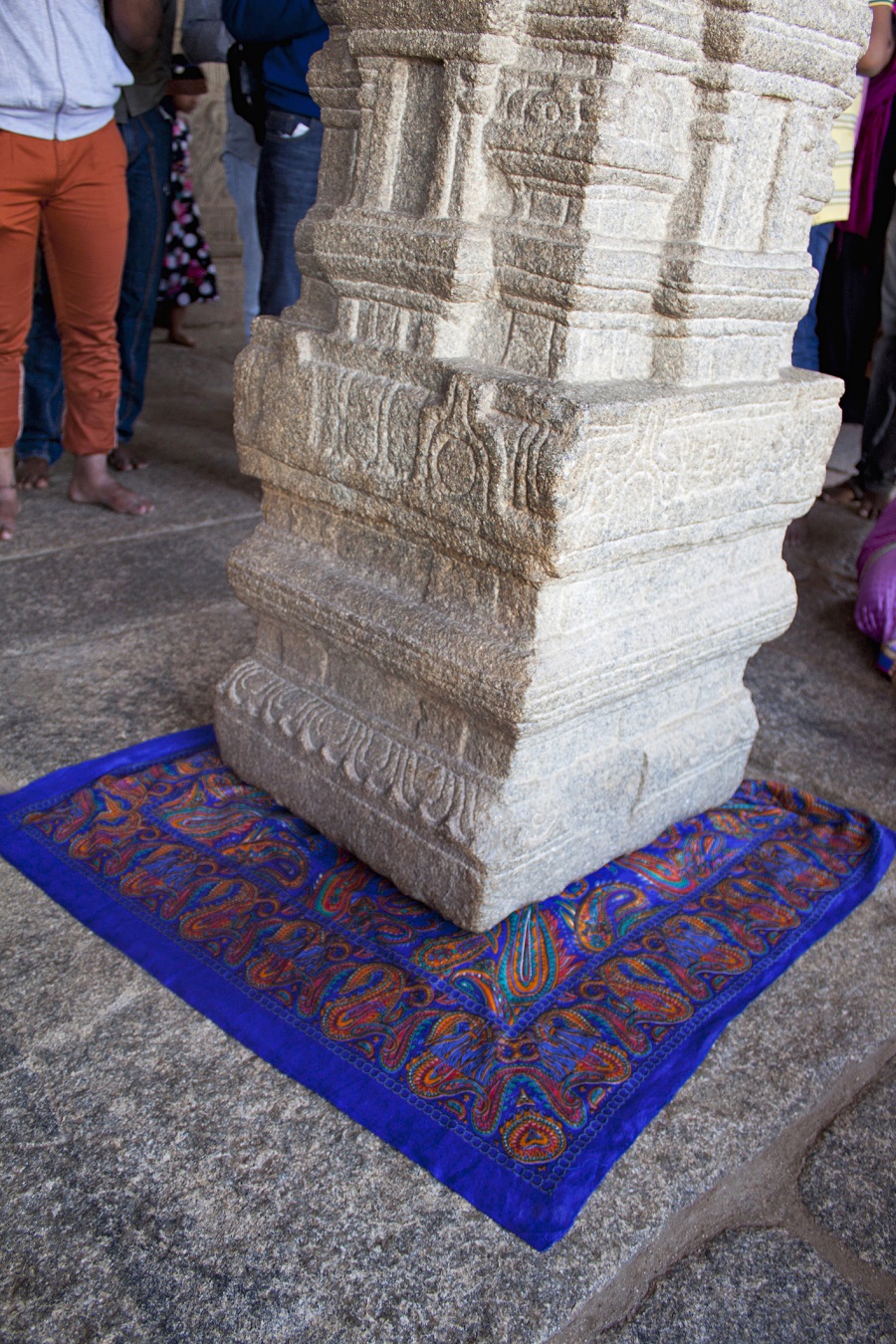 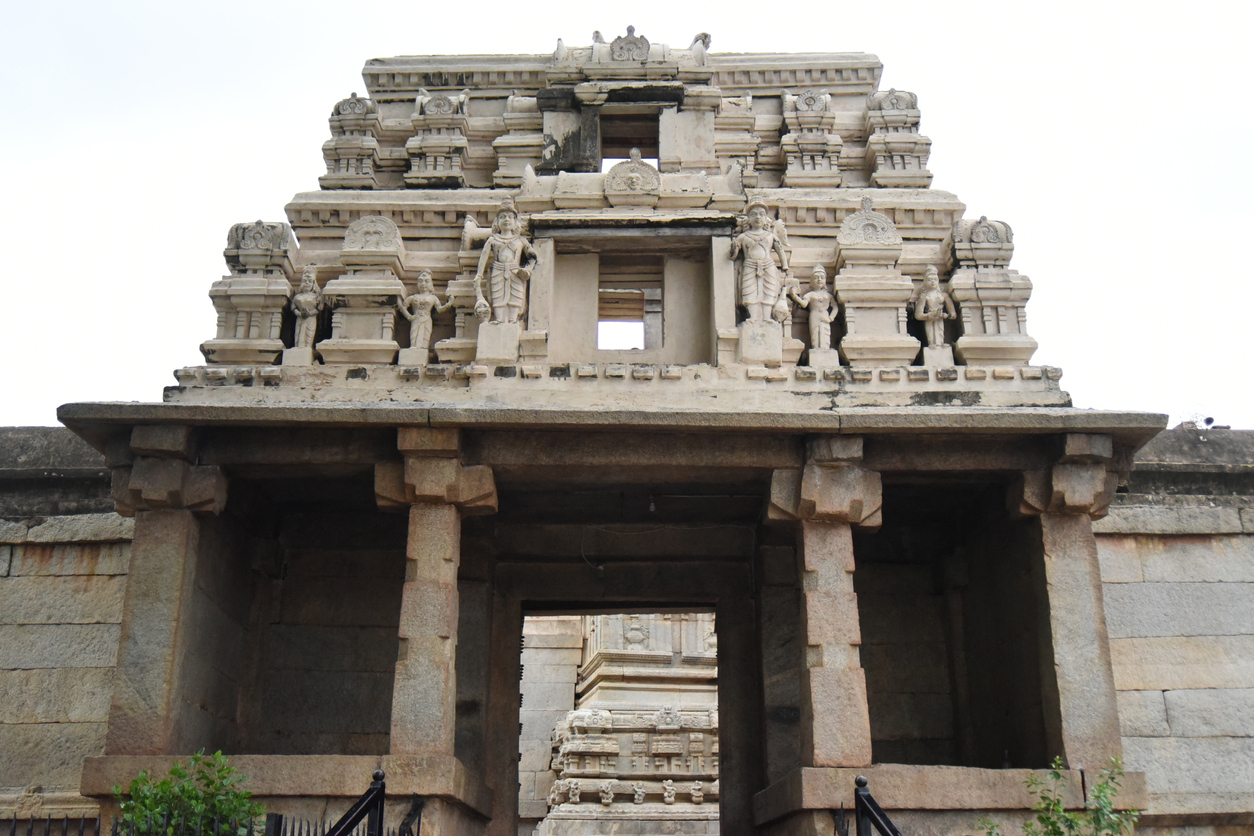 You have probably heard of Lepakshi saris. The fabulous designs are taken from the exquisite borders of the pillars of a little-known temple about 120 km from Bengaluru, called the Veerabhadra Temple. Every design is unique and quite intricate. Those sculptors must have taken such pride in their work!

Since most of the temple happens to be built on a tortoise-shaped rocky hill, the hill is referred to as Kurmasailam, meaning 'Tortoise Hill' in Telugu.

The temple is thought by many to have been built between 1530 and 1545 by Virupanna and Veeranna, two ambitious brothers who were governors under the Vijayanagara Empire during the reign of King Achyuta Deva Raya.

He was supposed to have been hand-picked by the famous ruler Krishna Deva Raya, who was his older brother, to be his successor. However, there is another school of thought that believes that the temple was built by Sage Agastya.

Replete with idols of Nandi, Shiva, Vishnu, Ganesh, Bhadrakali, etc., the typical Vijayanagara architectural style is very evident all over the temple with its awe-inspiring sculptures and detailed paintings on the walls and ceiling. The sculptures of gods, goddesses, musicians and dancers are similar to what one would find in the more famous Hampi. The various artworks showcase tales from the epics and the Puranas. These include a 24-feet-by-14-feet fresco of the fourteen avatars of Shiva (one of them being Veerabhadra) on the ceiling. And the deity of course — almost life-sized, armed and fierce, with a garland of skulls!

All in all, Lepakshi is a culturally, historically and archaeologically significant village. But there is something here at the temple, which is even better than all of the above, but we'll come to that in a moment…

The Veerabhadra Temple has an open-air Kalyana Mandapam (wedding hall), where the wedding of Shiva and Parvati is believed to have taken place in the presence of other gods and goddesses.

But you will notice that the Kalyana Mandapam has been left unfinished. Another local tale says that this venue was supposed to be ready for the wedding of Lord Shiva and Parvati, but since it was not ready, it was not used.

And why was it not ready, you might ask. Well, if you look really closely, you will also notice two red spots on the western walls of the temple. According to a local legend, the builder, Virupanna, the treasurer of the Vijayanagara Empire, is believed to have used the money from the treasury to build the temple.

Nothing bad about that, is there? But, matters were not so straightforward. This was done when the king was not there! So, when the king returned from his campaign and found that the treasury had been emptied by Virupanna, he was enraged! In his anger, he ordered that the construction be stopped immediately and the treasurer be blinded.

So, the wedding hall remained unfinished. As for Virupanna, he could not understand why he was being so severely punished for such a good deed.

Angered and upset by this command, Virupanna carried out his punishment himself! So the red blotches on the walls of the unfinished Kalyana Mandapam are supposed to be the blood from his eyes! 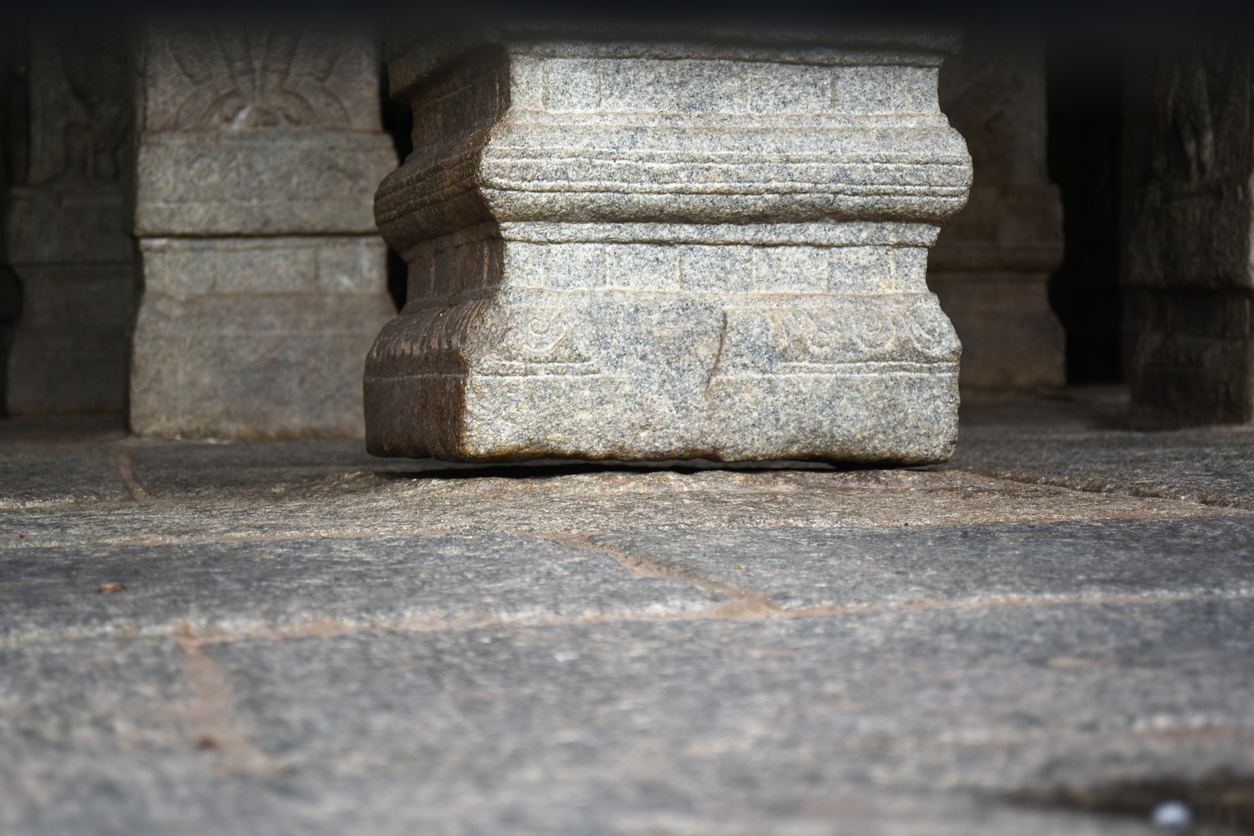 Now we come to what is quite a remarkable feature in this temple-something that puts all the other masterpieces in the shade; in fact, something that is an engineering wonder and an artistic masterpiece!

One corner pillar is the famous 'hanging pillar' that does not touch the temple floor at all! There is a small gap between the temple floor and base of the pillar and it is possible to pass thin objects such as a sheet of paper or a piece of cloth from one side to the other!

If you visit, you’ll see many people doing the same thing: putting a piece of cloth or paper underneath and sliding it to the other side, proving that the pillar is disconnected from the floor. How did ancient artisans construct such a huge pillar that defies gravity and hangs from the ceiling? And, we are referring to a 20-foot-tall, solid granite pillar!

It would be worth finding out how much it weighs, for we all know that the heavier anything is, the more difficult it is to carry, let alone suspend! And to top it all, the temple, as well as the pillars in the temple, were designed to resist earthquakes!

A host of marvels

While there are even more points of interest in the temple, like Durga Paadam, a rock chain, Vastu Purusha, the eyes of Viroopaakshanna, the Padmini race lady, etc., the hanging pillar is the most famous of these attractions. 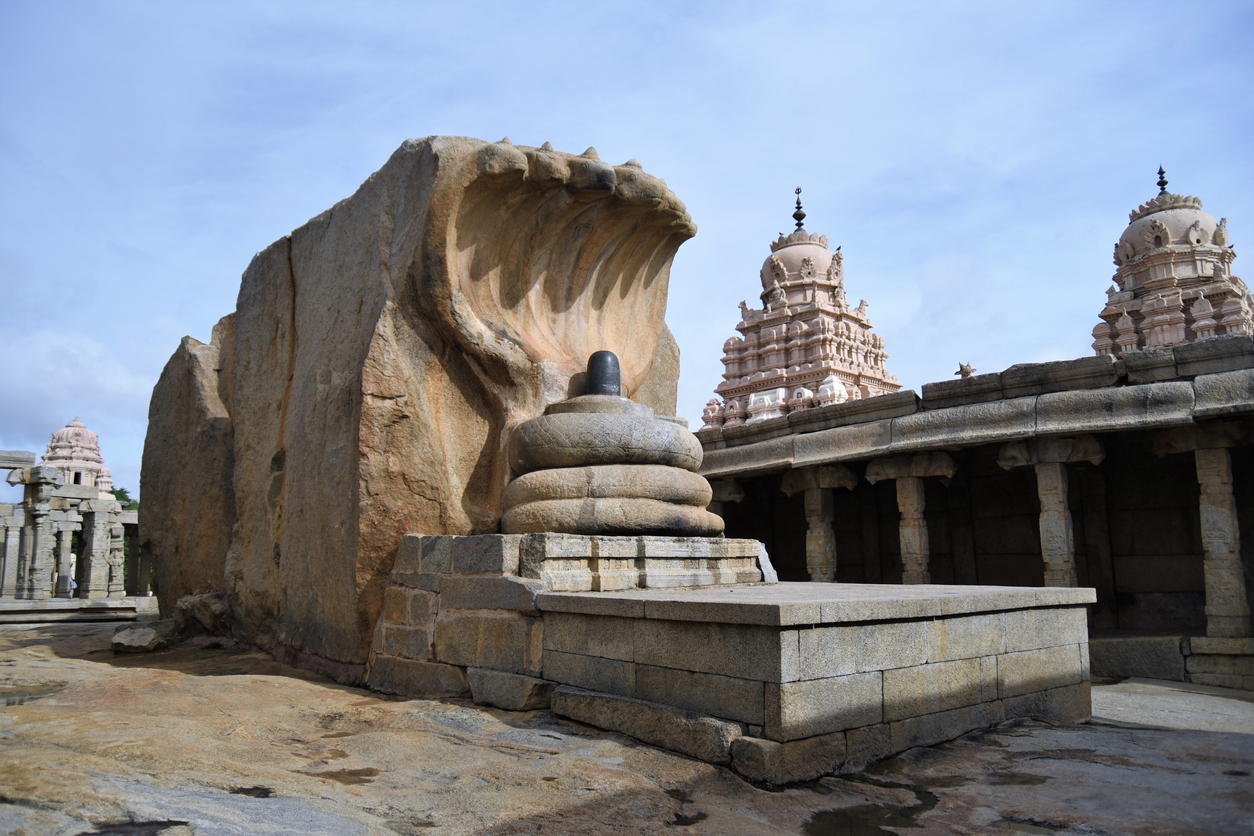 A huge granite Nandi is located about 200 metres from the temple at the front, which is 20 feet in height and 30 feet in length. The statue is decorated with garlands and bells, all carved out of a single block of stone, and is said to be one of the largest of its type in the world. The Nandi statue faces a popular granite statue of a coiled multi-hooded snake in a protective pose over a Shiva Linga on the eastern side of the temple's site.

An inquisitive British engineer had tried to move the pillar. You might wonder why anyone would do that. Well, he wanted to figure out the secret of how it was supported. This occurred in the pre-independence era, by the way. Anyway, during the attempt, ten more pillars also moved!

While analysing this, the engineer realized that every one of the pillars was placed just so, to maintain the balance of the entire structure. And, his operation, if carried through, would result in a distortion of the roof, which would probably make the entire structure collapse! So thankfully, he stopped the operation right away. But not before the magical pillar had got a bit dislodged from its original position.

In another story, it is said that the British government decided to do some repairs and attempted to remove the pillar. But try as they might, they couldn't move it out because it was fixed so perfectly. Not to be deterred, they kept trying and finally managed to only move it barely. They then realized that removing this pillar would be impossible and hence left it in this weird position. All these stories are just hearsay, by the way. Every stone here has a story to tell! 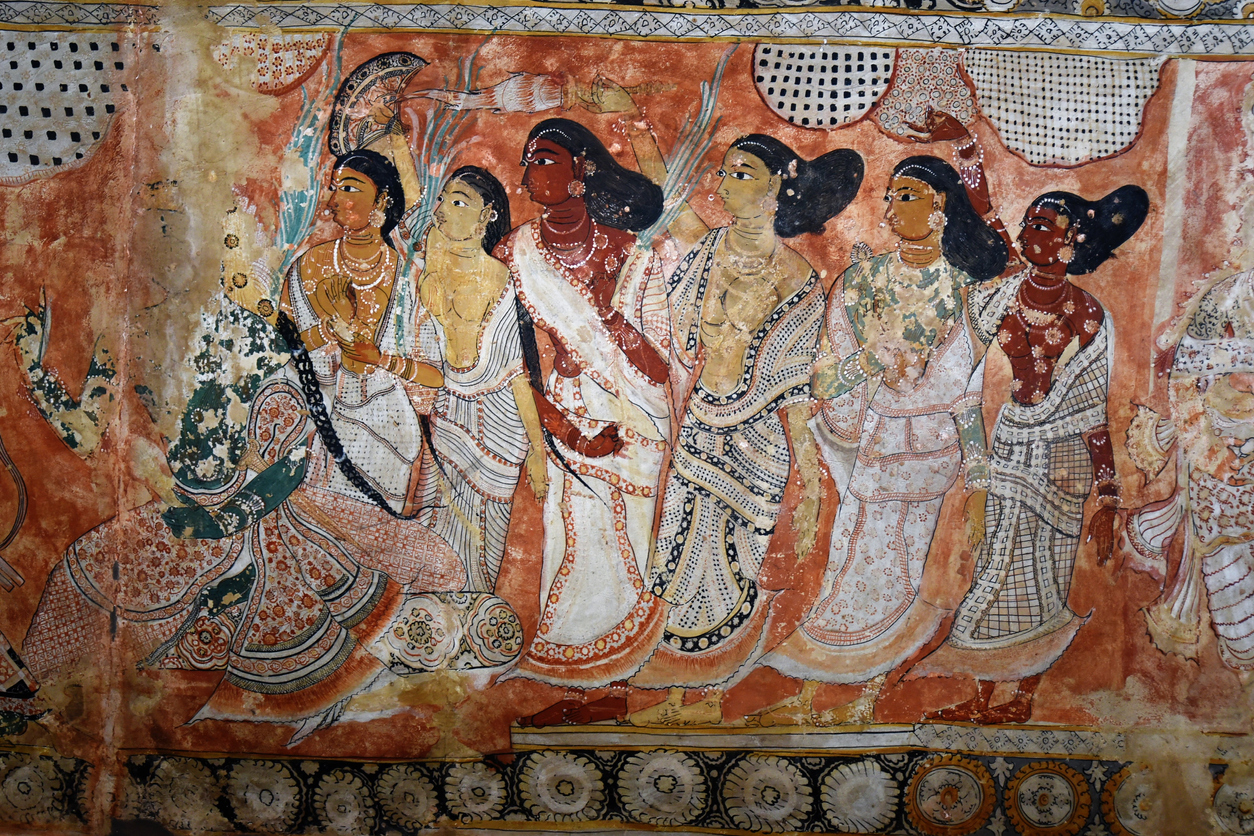 With so many theories being put forth regarding this seemingly magical pillar, the story that is really appealing is this: that this miraculous pillar was intentionally built to demonstrate the architectural brilliance of the Vijayanagara builders! What do you think?