Shaheen, who bowled three overs for the first time in the powerplay, was right on the money up front, jolting India twice in his first two overs to give Pakistan a dream start 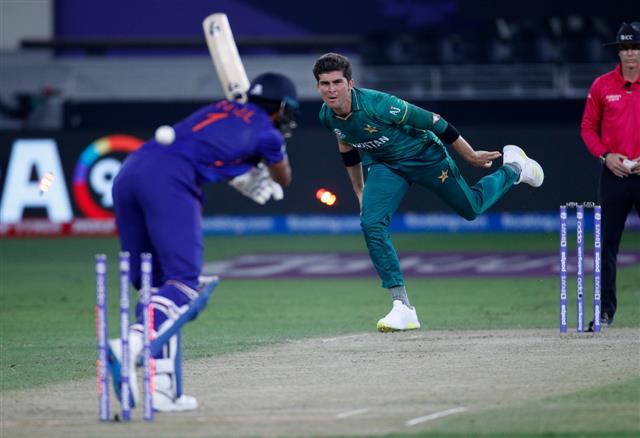 Shaheen Shah Afridi was all over the Indian batters in Dubai on Sunday. Reuters

Young Pakistan pacer Shaheen Shah Afridi said his plan to trouble the Indian top order with his fast inswinging yorkers worked to perfection as his sensational spell contributed massively to the team's first win over the arch rivals in World Cup history.

Shaheen, who bowled three overs for the first time in the powerplay, was right on the money up front, jolting India twice in his first two overs to give Pakistan a dream start.

"Yes, it was for the first time I bowled three overs in the power play. The ball was moving a bit, the conditions helped and I tried to give early breakthroughs. It really paid off," Shaheen told reporters in the post-match news conference here.

The 21-year-old cleaned up Rohit Sharma with an toe-crushing inswinging yorker on the fourth ball, before packing off KL Rahul in his second over with a peach of a delivery that seamed in.

"My strength is to bowl yorkers with the new ball, and give breakthroughs early. Of course, that was our plan and it paid off.

"I was confident that I would be able to get him out if I got a bit of swing or dip early on. It all went according to the plan."

He said he had full support of his skipper Babar Azam as he took 2/19 in three overs and returned at the death to remove Virat Kohli.

"He always asks me to bowl... Yes, it was part of the team plan that I will bowl the first over and then Imand Wasim will come. My goal was to give the team early breakthroughs, and it paid off."

Kohli got into the groove after India's stuttering start and took on Shaheen with a six in his third over.

Returning to action in the penultimate over, he finally trumped Kohli with a slower off cutter as the Indian skipper mistimed a pull giving a top edge to Mohammad Rizwan to depart for 57 off 49 balls.

"I had planned to dismiss Virat but he is the No. 1 player. There is no difference in the batting of Babar and Virat.

"I just bowled how I used to bowl Babar in nets. I didn't get the swing in my third over so I tried to hit the good length or bowl a slower cutter. Wickets are aiding a bit of spin, and pacers are also getting help because the ball is gripping, so it's very difficult for the batsmen to go for big hits at the death.

"Rotation is the key here, like Kohli and our openers played. All credit to them - Babar Azam and Mohammad Rizwan - and the way they finished the match."

Let’s not go overboard with our celebrations: Babar and former Pakistan captains after win over India

Pakistan rattled off the 152 target inside 18 overs with both Azam and Rizwan, hitting unbeaten half-centuries, handing India their first 10-wicket defeat in T20Is.

"A really good feeling to win against India in the World Cup and a special thing for our Pakistani team. It's good for Pakistan to start well, and yeah, our first game, and we're looking forward to more games."

Pakistan will be back in action against New Zealand on Tuesday. PTI