Spaniard has 19 Grand Slam titles to his credit; Roger Federer with 20 titles leads the pack while Novak Djokovic is third with 17 titles 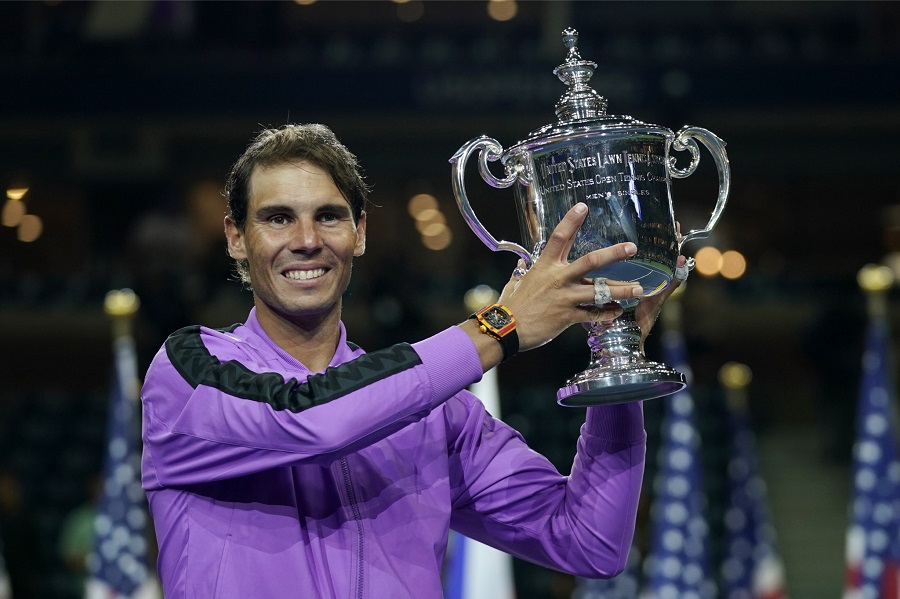 Rafael Nadal's decision to skip the US Open because of health concerns has added another twist to the intriguing three-way battle for the most career men's Grand Slam titles and, in many eyes, the title of Greatest of All Time (GOAT).

Had the 34-year-old Spaniard managed to retain the title he won in a five-set thriller against Daniil Medvedev last year, he would have joined Roger Federer at the top of the list with 20 titles.

Instead, his decision has cleared the path for 33-year-old Novak Djokovic to edge to within one of Nadal's Grand Slam tally with a fourth title at Flushing Meadows and 18 in total.

If it might seem unfair to gloss over the chances of the other 127 men in the US Open main draw, it must be remembered that Federer, Nadal and Djokovic have shared the last 13 Grand Slam titles between them.

Only Djokovic of the Big Three will be present in New York later this month with Federer, who turns 39 on Saturday, electing to undergo double knee surgery that will side-line him for the rest of 2020.

Not since the last century – the 1999 US Open – have both Federer and Nadal been absent from the main draw at a Grand Slam.

The COVID-19 pandemic has left little untouched in the world of sport and the race for GOAT status is no exception, not least in the cancellation of the Wimbledon championships for the first time since World War II.

Nadal's decision to skip the US Open was perhaps made easier by the fact that he will retain his ranking points from last year under the re-jigged system and by the proximity of the postponed French Open at the end of September.

On the clay courts of Roland Garros, Nadal has proved almost unbeatable over the last decade-and-a-half, winning his 12th title in 16 attempts in Paris last year.

That means any potential gain on Nadal for Djokovic in the GOAT race from the US Open could be short-lived.

The Serbian world No. 1 was one of those who were sceptical about travelling to the US Open but was all present and correct when the entries were announced on Tuesday.

Djokovic tested positive for the novel coronavirus at his Adria Tour exhibition in June but will hope he has recovered sufficiently to extend the 21-match unbeaten run he was on before the season came to a halt in early March.

Swiss Stan Wawrinka was the last player outside the Big Three to win a Grand Slam when he beat Djokovic in the US Open final in 2016 but he too will be absent from New York later this month for as yet undisclosed reasons. Reuters