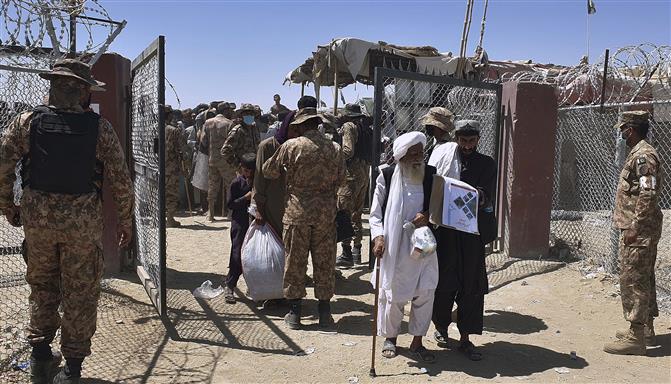 Pakistani soldiers stand guard while stranded people walk towards the Afghan side at a border-crossing point, in Chaman, Pakistan, on August 13, 2021. AP/PTI

Pakistani border and security personnel clashed with hundreds of Afghans wanting to cross into Afghanistan from a key border crossing in Chaman closed by Taliban in the restive Balochistan province.

Hundreds of Afghans had gathered on the Pakistan side of the Chaman border wanting to cross over but the Taliban who have captured the Spin Boldak area are not allowing anyone to cross until some of their demands were met by the Pakistani authorities, sources said.

The Taliban militants have closed the Chaman-Spin Boldak crossing since last week, demanding that the Pakistani authorities allow visa-free travel for Afghans.

The Taliban want the Pakistani authorities to allow those Afghans to cross the border who have an Afghan ID card or a Pakistani-issued refugee registration card.

As a result of the closure of the border crossing, which is a main commercial artery between the two countries, hundreds of Afghans are waiting on the Pakistan side and frequently get into arguments or clash with security forces in Chaman.

According to media reports on Thursday, Pakistani security forces at the border crossing had to fire tear gas shells and charge protesters with batons to disperse them after a Afghan traveller died of a heart attack as he waited in the heat to cross into Spin Boldak.

According to a source, the Chaman-Spin Boldak crossing generates a lot of revenue for both sides as close to 800 to 900 trucks carrying commercial goods, vegetables, fruits etc cross over on a daily basis.

Nearly two million Afghan refugees live in Pakistan, having fled decades of war in their homeland.

The Taliban have taken more than a dozen provincial capitals in recent days and now control more than two-thirds of the country just weeks before the US plans to withdraw its last troops.

Thousands of Afghans have fled their homes amid fears the Taliban will again impose a brutal, repressive government, all but eliminating women’s rights and conducting public executions. PTI

The car they were in collided with a truck near Alampur vill...