India must stick to its guns : The Tribune India

India must stick to its guns 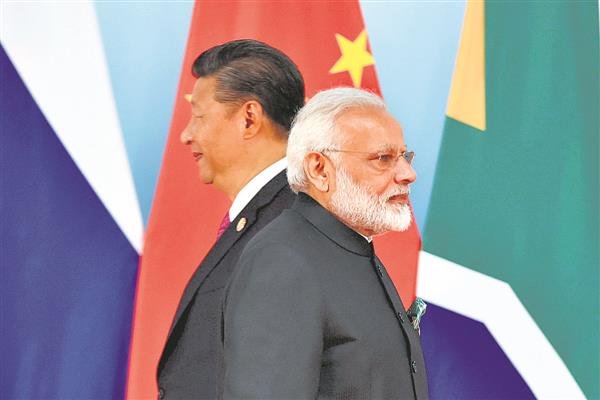 Salvage ties: The situation, though serious, can still be brought under control by political and diplomatic interventions.

Basically, two broad questions have arisen regarding why this incident in the Galwan valley took place on June 15. One is that the Chinese had come prepared with a plan to escalate the situation, thereby provoking the Indian side by violating the agreed principle on which disengagements had been taking place, as per the meeting held between India and China at the higher level of military commanders on June 6. Now, this agreement has been violated by the Chinese side by provoking the Indian side.

Two, it is possible that the Chinese did not have any plan for this escalation; it could have been possibly triggered by not handling the disengagement process properly by both sides, because this disengagement was happening at the lower level of military commanders. And this may have happened because of micro-level mismanagement.

The problem is that the casualties on both sides appear to be quite high. It now depends on how both sides will interpret the incident. Was it a violation of the border agreement, called the Peace and Tranquillity Agreement, signed in 1993, and the subsequent border agreement signed in 2013, where there was a laid-down protocol to defuse the face-off situation at the LAC? It depends on the interpretation of both India and China whether these agreements have been broken/violated. It also depends on the political will of the two countries.

Since the casualty numbers have risen, the possibility of escalation remains high. At the same time, the situation can still be brought under control by political and diplomatic interventions at the higher level. Therefore, the June 15 incident should not affect the disengagement process. But it also now depends how both sides will tell the story of the incident to their people. The Chinese side is not giving the exact figure of casualties. We do not know if they are doing this intentionally or they want to hide the figures from their own people or from the world.

The other factor is whether the Chinese action in the Galwan valley has any strategic dimension. There are many interpretations and analyses in this regard, linking the issue to India’s closeness to the US and tension with Pakistan, Nepal and the internal problem of Covid-19 in India. The Chinese must be calculating all these factors in their strategy to put pressure on New Delhi. Therefore, the border tension is just a manifestation of a larger political issue at the global level.

The other dimension is that we are overlooking the local factors of not distinguishing between Ladakhi and Tibetan history. This distinction has been confusing over the past many decades. Actually, this kind of border tension is not new, as this has been happening for centuries between Ladakhis and Tibetans over the issue of defining borders, rights over grazing land and fight over trade disputes. As a result, all kinds of incidents like kidnapping and murder have been happening for centuries. It is not a new thing.

Thirdly, this area has been neglected in many ways for decades after Independence. It was in the hands of Jammu and Kashmir’s the then political leadership, which had its own obsession with issues in Kashmir. And now that India has made Ladakh a Union Territory, China seems to be worried about the future of Ladakh and its impact on it, including the border issue.

India needs not only to strengthen the military capabilities in the region, but also should have a forward policy in terms of economic expansion, road building, connectivity and resuming old trade links with Xinjiang and Tibet. In fact, Ladakh is geopolitically very important for India as it provides a gateway to East Asia, Central Asia, Europe and Russia. But we have not thought of exploiting the strategic importance of Ladakh to extend our influence in this direction. As a result of which, we have become defensive. We are only talking about defending our border. It should have been about going beyond our border and reaching out to the world. That is why China is now making offensive moves across the Himalayas into South Asia. It should have been our approach to go beyond the Himalayas as well.

The current stand-off in eastern Ladakh should be resolved amicably through discussions and talks. India must now prepare a bigger strategy, not only to protect our territory, but also to go beyond our territory. So, the local factor should also be taken into consideration, and how the area can be reconnected with the region beyond.

At the same time, we have to be very firm that we are not going to lose any territory further. Local people should also be involved in the defence of our border, especially the nomadic people of eastern Ladakh. They know border management better than anybody else.

The important point is to have higher-level diplomatic and political intervention from both sides of the LAC to defuse the situation.