Had India supported the sanctioned raising, 90 per cent capability would have been achieved by now, which could have been an effective deterrent, definitely raising costs for incursions by China. The raising, however, was not backed by the sanctioned financial resource and thereafter finally put on hold in 2018. 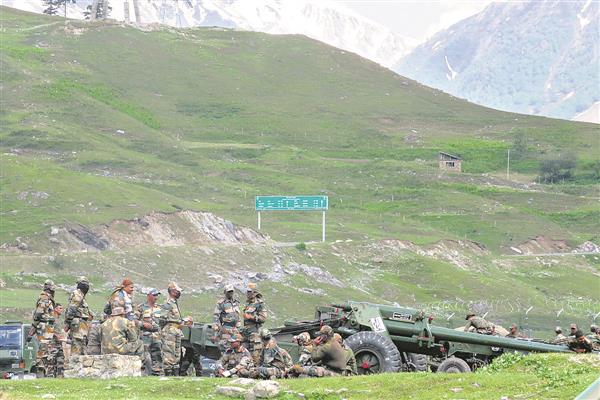 Raising the bar: The Army’s quest for critical capability has arisen from China’s policy of coercion that necessitates safeguards.

The authors are retired military officers

The unprecedented violence in the Galwan valley in eastern Ladakh on the night of June 15, when 20 Indian soldiers — including the Commanding Officer — were martyred, has disturbed the fragile peace and tranquillity along the 3,488-km India-China border. It is another matter that reportedly, the People’s Liberation Army (PLA), too, paid a price with around 40 fatalities. This tragic incident has converted the unsettled border into a contested border, thus changing the dynamics of ensuring territorial integrity. The till now robust agreements and protocols which ensured peace and tranquillity stand challenged. While the Indian Army is ensuring an equitable and proportional deployment all along the border with China, hectic diplomatic parleys will try to defuse the sensitive situation in the immediate term. The key question which needs to be addressed — Is the Army future-ready and optimally structured and equipped to face China’s aggressive behaviour?

Analysts observing the ongoing standoff have been critical of repeated Chinese boundary violations and military coercion to create a ‘new normal’, year on year, to seek a creeping advantage along the Line of Actual Control (LAC) as well as geopolitically. There are calls for India to do a ‘tit for tat’ militarily to force a status quo ante on the Chinese. This will need capabilities for ‘active deterrence’, based on improved defensive and offensive capacities, including in the asymmetric domain.

It was precisely to create this ‘offensive (active)-defence’ capability that the Army, in the first decade of this millennium, sought the raising of a Mountain Corps, commonly referred to as the Mountain Strike Corps. The intent was to have a dedicated Corps to comprehensively look at the operational dynamics of the entire border with China, collate the entire ISR (intelligence, surveillance and reconnaissance) canvas of Chinese activities, provide acclimatised battle-ready formations, with inbuilt rapid air mobility to respond to situations, like the current intrusions, for effective and equitable quid pro quo options. The aim was to create capabilities to enable military-diplomatic negotiations from a position of relative strength. The Mountain Corps, once fully formed and operationalised, would have given multiple military employment options with integral ISR and rapid deployment capabilities exploiting mountain-specific platforms like ultra-light howitzers, helicopters (including heavy-lift ones like Chinooks and attack helicopters like Apaches), UAVs, missiles etc. It would have also enabled synergising the asymmetric warfare means. Notably, this geographically unified structure was proposed ahead of China creating the Western Theatre Command in 2016.

The overall intent was to induce an element of ‘active-defence’ rather than any aspirations of a deep offensive capability along the LAC. The Corps, trained and equipped for operations in mountains, would also be effective against Pakistan. The ‘strike’ part of the nomenclature was misconstrued and used as a propaganda tool by certain inimical elements to stymie the complete raising. The Army’s quest for this critical capability, against China’s coercion, was put through intense scrutiny by the National Security Council, Chiefs of Staff Committee and across Service HQs. Various alternative options were also considered: building maritime capability instead of land-based Corps, induction of long-range missiles, and raising of Special Forces units to interdict lines of communication. The option of raising small-size formations instead of a Corps was also considered. Despite the sound operational rationale, the underlying concern that remained was the financial consideration of raising and sustaining a formation of nearly 90,000 men.

On July 17, 2013, in the wake of the face-offs at Depsang, the government-sanctioned the raising of 17 Corps, with a non-defensive role along Northern borders. The aim was to create capabilities to deter China’s aggressive behaviour along the contested LAC. Manpower accretions and initial raising expenditure of about Rs 65,000 crore ($8.6 billion) was considered a prudent long-term investment against an increasingly hegemonic China. To mitigate the financial burden, the raising was to be carried out over eight years, to be completed by 2020-21.

Had India supported the sanctioned raising, 90 per cent capability would have been achieved by now, which could have been an effective deterrent, definitely raising costs for incursions by China. The raising, however, was not backed by the sanctioned financial resource and thereafter finally put on hold in 2018.

Events like the current LAC stand-off offer us an opportunity to review some capability development decisions in hindsight and transformation decisions in perspective. An overly aggressive China seems to have lost respect for mutual sensitivities, concerns, aspirations and is creeping menacingly into our immediate neighbourhood. India has no choice but to build defensive capability with an integral offensive content. This calls for expeditiously reviving the raising of the Corps for mountains with all its integral force multipliers. Substantial cost optimisation can be carried out by utilising the manpower savings accruing from Shekatkar Committee reforms.

It is rightly said that to respond to China, India must focus on economic development, with the ability to respond to weaponisation of trade. Aspirations of becoming an economic power with ability to fulfill global and regional aspirations cannot be realised without permanently securing our frontiers. Periodic Chinese coercive actions along the LAC only dampen the momentum and remain a perpetual drag. The cost of capability development, including reviving of the Mountain Corps, is an investment for a secure and self-reliant, risen, responsible and resurgent India.

Unfortunately, going by past experience as and when the present situation is restored, it will be back to business as usual with focus on Pakistan in the security domain, until again China resorts to military coercion along the LAC. It is a given that the incursions along the LAC will increase in frequency, scope, depth and intensity, which is the new normal. India needs capabilities to deter China’s aggressive behaviour, especially along the contested borders, and the Mountain Corps is one such imperative.

India must stick to its guns