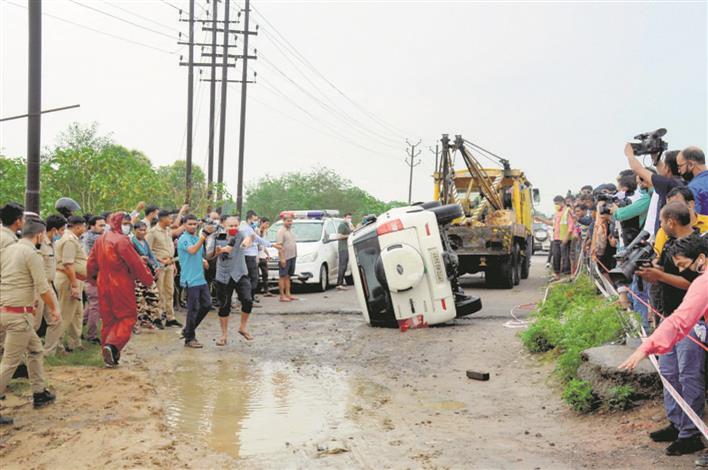 The toppled SUV from which Vikas Dubey allegedly tried to escape before he was killed in an encounter near Kanpur on Friday. PTI

Gangster Vikas Dubey was shot dead on Friday by the police, who claimed he was trying to flee after the car carrying him from Ujjain overturned on an isolated stretch of the highway on the outskirts of the city.

The SUV met with the accident at Bhaunti in Kanpur district, toppling on the road which was slippery after rains, the police claimed. Another police statement said a herd of cows and buffaloes suddenly appeared before the vehicle, causing the accident.

The police said the gangster snatched a pistol from one of the policemen injured in the accident and was shot when he opened fire while trying to flee.

Six policemen, including two from the Special Task Force, were hurt in the accident and the exchange of fire around 6 am, an official said.

Dubey was the sixth man to die in a police encounter after the ambush he allegedly masterminded in Kanpur’s Bikru village past midnight on July 2, killing eight policemen who had come to arrest him.

Madhya Pradesh police arrested Dubey outside the Mahakal temple in Ujjain on Thursday and handed him over to an Uttar Pradesh Police team. Inspector General Mohit Agarwal said Dubey was asked to surrender but when he started firing with an “intention to kill”, the police opened fire in self-defence.

Political analyst Tehseen Poonawalla has sought the intervention of National Human Rights Commission (NHRC) in Dubey’s encounter killing. He alleged the due process of law was not followed in the case. The NHRC had sent several notices to the UP Government over a number of alleged encounter killings by the police in 2017-18. — Agencies

July 4: UP Police suspend Chaubeypur station officer Vinay Tiwari, suspected of tipping off Dubey about a raid to arrest him; gangster’s house at Bikru village razed

July 6: UP Police suspend 3 more of their own

July 7: All 68 personnel of the Chaubeypur police station shunted to Reserve Police Lines

Shot thrice in the chest

Dubey was hit by three bullets in the chest and one in the arm, suggesting he was shot from the front and not while he was fleeing, in which case he would have been hit in the back.

The debate over whether or not to handcuff suspects during transit has come to the fore once again. The SC has disapproved of the practice, calling it ‘inhuman, unreasonable, over harsh & arbitrary’.

Hours before, Plea in SC

Hours before the encounter, a petition was filed in the Supreme Court seeking directions to the UP Govt and the police to safeguard his life and ensure that he is not killed by the cops.

Past NHRC notices to UP

The National Human Rights Commission had in the past served notices on the UP Government over alleged encounter killings by the state police in 2017-18.

The killing is reminiscent of the shooting of four accused in the Hyderabad veterinary doctor’s rape-murder case in 2019. All four were then killed as they ‘snatched’ weapons and opened fire.

The Cong demands a judicial inquiry by a sitting SC judge. The truth about those who patronised criminals like Dubey must be revealed Priyanka Gandhi Vadra, Congress

This encounter seems to be fake. He could have disclosed big secrets, like who sheltered him. They are as much to blame Sharad Yadav, Loktantrik Janata Dal

Attempt to save Govt

It is not the car that has toppled. The encounter saved the state govt from toppling Akhilesh Yadav, Samajwadi Party

An SC-monitored probe should be conducted into the encounter as well as the ambush in which eight policemen died last week Mayawati, Bahujan Samaj Party