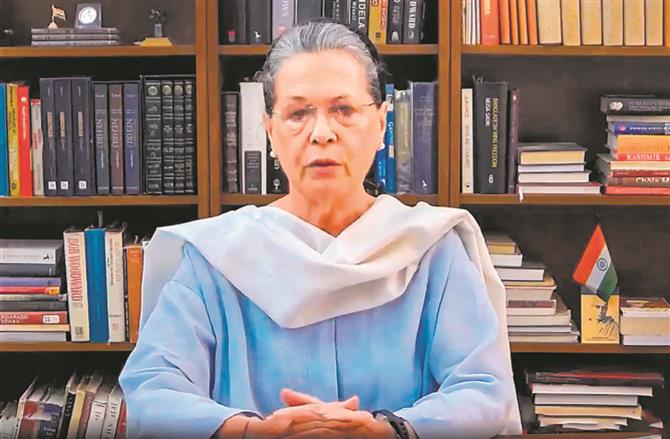 Jolted by Punjab Congress president Navjot Singh Sidhu’s resignation months ahead of Assembly elections, the Congress on Tuesday put up a brave face, describing the former MP’s reaction as emotional.

'All over CM's chair', AAP's swipe at Punjab Congress

“All will be well. This is an emotional reaction by Mr Sidhu,” AICC general secretary organization KC Venugopal sufficed to say today with the party dismissing the Punjab question in the official press conference where Kanhaiya Kumar joined the AICC, indicating attempts to placate Sidhu may be on.

Meanwhile Congress President Sonia Gandhi is learnt to have initiated consultations with select senior leaders on the way forward.

The Tribune has learnt that views of veterans are being sought on how best to address the “royal mess,” with a section of insiders terming the developments a "blessing in disguise."

A leader who was contacted said a replacement of the PCC chief could well be on the table though a last minute reconciliation, which appears difficult, may also happen.

“With his public resignation, the messy fallout and subsequent resignations of supporters, Mr Sidhu appears to have made reconciliation quite difficult if not impossible. The party wants a solution but this is a typical catch 22 situation. My sense is that the search for the replacement of the PCC chief may well be on while other solutions are mulled. Views are being sought on the way forward,” said a Congress leader.

The developments have particularly hit the credibility of Rahul Gandhi and Priyanka Vadra who had thrown their weight behind Sidhu backing him enough for Amarinder Singh to resign as CM.

Top sources said placating Sidhu, although desirable, is a tall order as it would entail replacing sitting ministers and officers chosen with the approval of Chief Minister Charanjit Singh Channi, the Congress is hailing as the state's first Scheduled Caste CM.

“Where would the replacements of minissters and officers chosen by the CM leave Rahul Gandhi’s conviction to back an SC chief minister? If replacements are done, which would have to be done to pacify Sidhu, what message would it send for SC empowerment? The choices for the Congress are extremely tough now. Sonia Gandhi would be the most hurt today having gone along with her children on the issue,” said an AICC functionary as the party that set out to retain Amarinder Singh and Sidhu ahead of polls runs the risk of losing both.