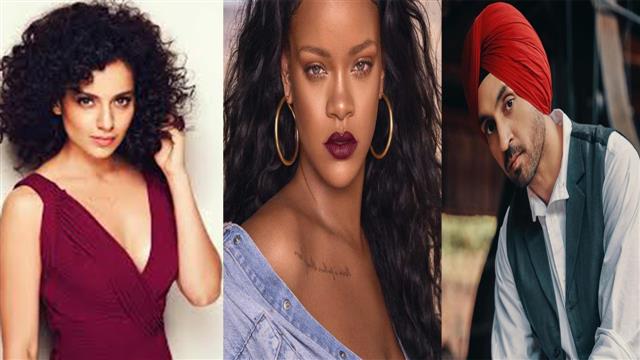 Bollywood actor Kangana Ranaut has faced a major backlash for calling international pop star Rihanna a ‘fool and dummy’ for coming out in support of farmers protesting on the outskirts of Delhi since November against the government’s three agricultural laws.

On Tuesday, Rihanna created a flutter by twitting: "Why aren't we talking about this? #FarmersProtest ."

Rihanna’s followers went up by 10 lakhs after she posted the tweet, by morning, the farmers’ and the government’s obduracy were getting flagged by prominent American, British and Canadian liberal politicians.

Also read: Kangana Ranaut gifts 4 flats to Rangoli Chandel, other cousins in Chandigarh; here’s how much they cost

Soon after Rihanna's tweet, Kangana Ranaut chose to offer an answer to Rihanna and responded to her tweet using adjectives like "fool" and "dummy" while addressing her and calling the farmers “terrorists”.

No one is talking about it because they are not farmers they are terrorists who are trying to divide India, so that China can take over our vulnerable broken nation and make it a Chinese colony much like USA...
Sit down you fool, we are not selling our nation like you dummies. https://t.co/OIAD5Pa61a

Kangana wrote: "No one is talking about it because they are not farmers they are terrorists who are trying to divide India, so that China can take over our vulnerable broken nation and make it a Chinese colony much like USA... Sit down you fool, we are not selling our nation like you dummies."

Exactly, @rihanna is fame all over the world and Kangana is like jumping around like kangaroo to get fame. #WeSupportFarmers #FarmersProtest #RihannaSupportsIndianFarmers https://t.co/5y1TjecMM3

Kangana Ranaut also raged at a Twitter user who pulled out an old tweet of hers, seemingly expressing her appreciation for a song by Rihanna.

Meanwhile, Punjabi singer and actor Diljit Dosanjh has expressed his gratitude to American singer Rihanna on his Instagram story.

She hasn’t released a single song in 5 years, sells make up but looks like she is feeling Corona blues,Forbes estimated incomes are just PR gimmicks big sham,a million or two won’t hurt her right now, also notice in her tweet she did not commit to any opinion just a vague tweet. https://t.co/57VGWJZ8Be