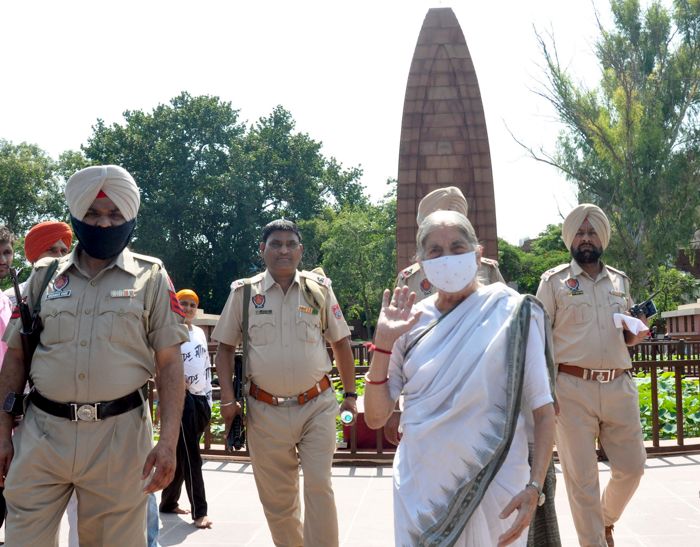 BJP leaders are divided over the renovated Jallianwala Bagh. Former Cabinet Minister and senior BJP leader Laxmi Kanta Chawla today visited the Bagh. Pointing out the flaws, she said it was an act of “tampering with the heritage in the name of modernisation”.

Chawla said she would bring it to the notice of PM Narendra Modi that how the Jallianwala Bagh committee had changed the ambience of this historic site and made it a recreation garden.

On the e-ticketing machines installed at the entrance, she said: “This shows that a paid entrance to the Bagh is next to be introduced.... The narrow street from where General Dyer had gained entry with his troops has got murals of people in joyous mood.

The ‘martyrs well’ has also lost its identification that was there in our minds with the old structure. Now, it looks like a glass box. Similarly, the new exit gate mismatched with the history. There was no separate gate other than the narrow street. The Amar Jyoti has been shifted backside where there were toilets. I will ask Modi ji to take cognisance and direct the members of the Jallianwala Bagh committee to restore its originality.”

She also reiterated her demand that the PM-led Jallianwala Bagh National Memorial Trust should make public the details of Rs 20 crore spent on the project. Malik, one of the members of the Trust, said Chawla was free to write to the Union Ministry of Culture which had executed the project.

He stressed the heritage aspect of the Bagh was never touched. “The murals on both side walls of the narrow street depict that people from all walks of life were entering the Bagh to celebrate Baisakhi that fall on that particular day in 1919 too. Not all were there to attend the assembly against the Rowlett Act. The Amar Jyoti has been placed as per the requirement of the light and sound show,” he said.

Malik claimed the separate exit gate was already there during the Congress regime. “We just refurbished the passage for safe visitors’ exit”, he said. On the paid entry, Malik said: “Being a Trust member, I assure you that the entry to Jallianwala Bagh would be free.” — TNS

The martyrs well has lost its identification that was there in our minds with the old structure. Now, it looks like a glass box. — Laxmi Kanta Chawla, BJP leader

The originality of the martyrs’ well is intact. It has been upgraded so that visitors can get a clear view of inside the well. — Shwait Malik, BJP MP