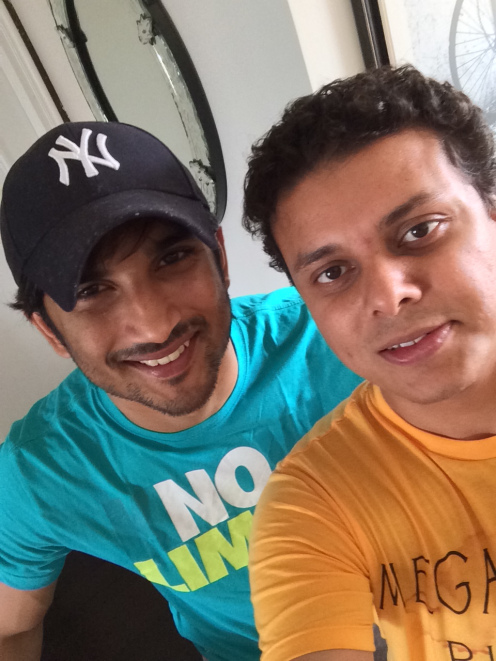 Sushant's Singh Rajput's brother-in-law has written a lengthy blog post after the late actor's therapist claimed that he had 'bipolar' and that Rhea Chakraborty was his ‘strongest support’.

Sushant's brother-in-law, Vishal Kirti, begins his post with a disclaimer.

He explains that his comments are "independent opinion" and in response to the interview of Susan Walker—who claimed that Sushant and Rhea were consulting her since November-December 2019.

Vishal revealed that though he last saw Sushant in July 2017, during his trip to India, they shared a "healthy relationship" over the years.

“I have known him since 1997 (my 8th grade) since his sister Shweta (my wife now), he and I went to the same school. Shweta and I were in the same grade, and he was a grade junior,” Vishal wrote, adding that even after he moved to the US in 2006, he was in touch with Sushant till early 2019.

Vishal said that he believed that mental health issues should not carry a ‘special’ stigma.

“The reason I said ‘special’ is that it’s nearly impossible to completely eliminate stigma from health issues. For eg., if there is a person suffering from diabetes, there will be some amount of stigma about his/her lifestyle even if this person was genetically predisposed. Similarly, whether we like it or not, there is no country in the world where stigma around mental health is zero,” he said.

Vishal questioned Susan’s diagnosis of Sushant as bipolar, asking how she could have made that assessment in less than two months. “Diagnosing mental disorders is an arduous task and diagnosing someone Bipolar (I or II) is even more so. Not only do you have to observe the person very closely, but you also have to observe them over long periods of time (it takes six years on average to diagnose after the onset of symptoms). Susan very conveniently diagnoses Sushant in less than two months (perhaps over a couple of appointments), with a life-changing diagnosis,” he said.

“Prior to October/November 2019 (and certainly prior to meeting Rhea), as far as I know, no one who has lived with Sushant has ever complained about his mental health, nor has Sushant himself,” he said.

Vishal then went on to question Rhea’s role, using information ‘available in the public domain’.

He said: “The FIR claims that Sushant was perhaps given psychotropic drugs by Rhea (maybe even without his knowledge). Covert/Surreptitious medication is also perhaps illegal in the 21st century. There could be many explanations of this sudden onset of mental health issues in October/November of 2019. This could be a result of covert medication and withdrawal of psychotropic drugs (perhaps the covert medication stopped during their Europe trip in October 2019 [perhaps because of eating out mostly so no opportunity to covertly medicate him with food? or perhaps intentionally not medicating?], which led to withdrawal symptoms). And then, he was perhaps taken to the psychotherapist under the pretext of care.”

According to Vishal, the fact that Rhea set up Sushant’s appointments with the therapist and was present at their sessions "could be a sign of keeping a tab on Sushant’s conversations with the psychotherapist". He also alleged that she may have been doing it to ‘keep evidence of mental health issues so that it can be used later for blackmail or to justify the firm control on his resources".

“Sushant seemed to have suffered gaslighting at the hands of Rhea, based on the information in the public domain. Antisocial Personality Disorder is the more technical term for sociopathy/psychopathy and could be potentially diagnosed for Rhea (I am not diagnosing, only suggesting). Based on what happened, gaslighting seems to fit the bill, in addition to other methods of confinement and control. Again, I have every right to question based on the information in the public domain and unlike Barkha Dutt, I am NOT privy to the statements from Rhea’s psychotherapist and I am not disclosing private mental health information,” he said.

“Based on the evidence in the public domain so far and the claims in the FIR, Rhea is the prime suspect in this case. It will indeed be a shocking surprise to the entire nation if it is found in the court of law that she was a loving partner and not an opportunist who eliminated most of Sushant’s ties with his family and friends,” he added.

Vishal said that he was ‘very disappointed’ with journalist Barkha Dutt’s coverage. “Unless proven in the court of law that Sushant took his own life because of a mental illness that happened without any foul play (gaslighting, blackmail, covert medication, or overt overmedication), this is NOT the example to use to create awareness around mental illness. Even if proven in the court of law, the only thing that can be even remotely used is the awareness aspect of it with the intention to help and never the intimate details of the diagnosis or disclosure of diagnosis from the mental health professional,” he said.

“Barkha Dutt could have chosen to emphasize the financial angle. Most crimes have a financial angle and when there are so many pointers (from regular cash withdrawals and large expenses to shell companies), she chose to NOT focus on them and that does reek of agenda,” he added.

On Saturday night, Susan told Barkha in a statement that she felt it was her ‘duty’ to speak up, to counter the ‘misinformation and conspiracy theories currently raging on social media’. “In my capacity as a clinical psychologist and psychotherapist, I met Sushant and Rhea on several occasions in November and December 2019 and communicated again with Rhea in June of this year,” she said.