Overall, the place has a happy feel to it — if that’s how you want to feel at the site of the most egregious massacre committed by the British Raj in India 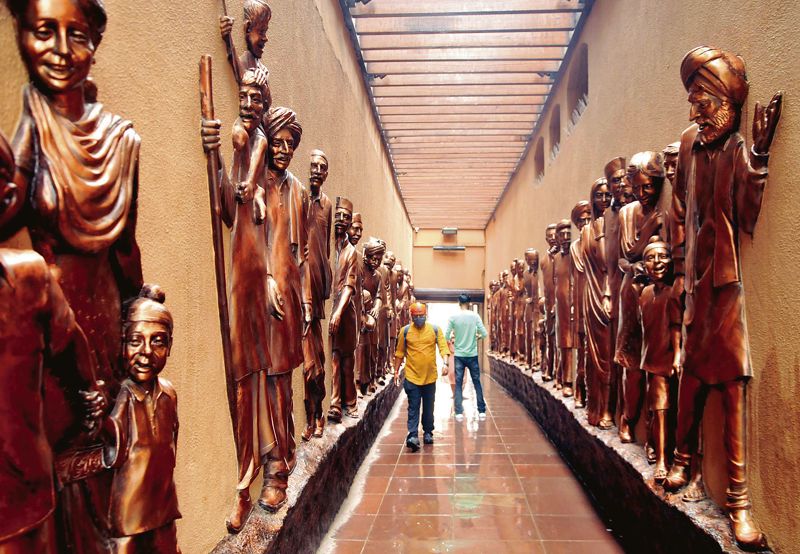 The narrow passage was a death trap for thousands. After the renovation, it is brightly lit and lined with murals depicting a cheerful set of persons making their way into the Bagh. Not exactly a place for sombre reflection anymore.

It is grotesque, this thoughtless desecration of one of the most poignant memorials of our Independence struggle — the anger being expressed on social media and by some of the leading Indian and international historians who have worked on the Jallianwala Bagh massacre is legitimate and I’ve been straining to join the fray. But first, I wanted to see it for myself.

I went to the Bagh and here’s the good news first. The undulating, landscaped lawns look lovely; there are a lot of young people taking pictures and selfies, most of them in a cheerful, out-for-a-picnic kind of mood. The museum and galleries are kind of interesting to the extent that they provide easy-to-digest information for the uninitiated tourist. I haven’t seen the light-and-sound show and can’t comment on the basis of personal experience. But educated citizens of Amritsar who have seen it are near-unanimous in decrying its tackiness. Overall, the place has a happy feel to it — if that’s how you want to feel at the site of the most egregious massacre committed by the British Raj in India.

For me, the visit to the newly beautified environs of the memorial and to search for traces of the place we knew was a gut-wrenching experience. 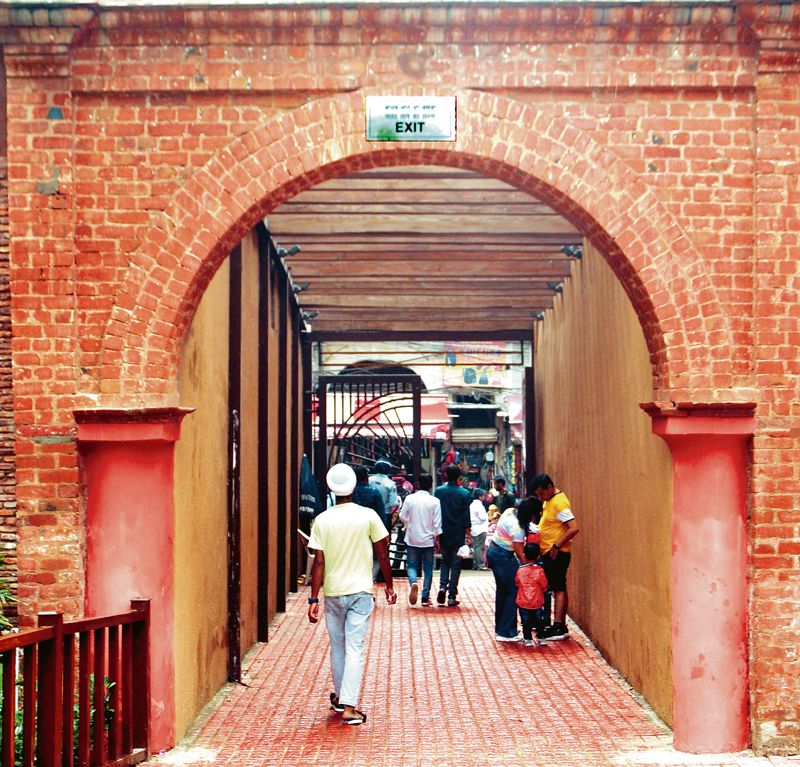 I was born in Gali Punjab Singh, a short distance from the Bagh. As a kid, I remember going to the Bagh whenever we had relatives visiting Amritsar for the customary pilgrimage to the Golden Temple. We would make our way through the nondescript wrought iron gate and down the narrow passage which dramatically opened into a mostly barren maidan. The pink sandstone memorial stood in front and a footpath took us to that red-brick wall, unplastered and pockmarked with bullet holes from the Vaisakhi day massacre. My mother would show the visitors around, making it a point to take a detour to the left and stop near the ancient martyrs’ well as she painted a vivid image of helpless men jumping into its bottomless depths, some to escape the hail of bullets and others after they had been shot. Peering over the ledge into the darkness below, I would try to see if the water was still tinged red with all the blood. There were times when I thought I could hear the screams of the victims echo dimly as I stood transfixed by the darkness.

That infamous well, alas, has been enclosed in a brick-and-glass wall. Peer through the glass and you see the nicely backlit interior of the well, its walls painted an alluring pink. It makes a great spot for selfies, as we saw one couple after another make a beeline for the backdrop. With the song ‘Pagdi Sambhaal Jatta’ streaming from the outdoor speakers, it also provides a somewhat curious ambience for video enthusiasts.

But there is a more important reason for my anguish. My grandfather Nanak Singh was one of the fortunate survivors of the Jallianwala Bagh massacre. In the stories we often heard from our grandmother, he had gone to the rally to protest against the Rowlatt Act with two of his friends. Both friends fell victim to Brig Gen Dyer’s bullets, while my grandfather was knocked unconscious in the stampede and left for dead. He paints an intense picture of that ghastly afternoon of April 13, 1919 in ‘Khooni Vaisakhi’, a ballad that was first published in May 1920 and banned soon thereafter by the Raj.

This was a 22-year-old youth who had no formal education beyond fourth grade in school. And yet, he had the sensibility to recognise that the martyrs of Jallianwala Bagh must be remembered for posterity. In his opening verses that are an invocation to Guru Gobind Singh, Nanak Singh writes:

I will fall back on his words to give us a description of the Bagh and the mood of Amritsar city as he saw it a century ago.

That narrow lane to enter the Bagh
Sealed off on Dyer’s command, my friends.
No exit, no escape, no way out was left
Making Bagh a deathly trap, my friends.
A fortunate few somehow survived,
While most died then and there, my friends.
Some ran with bullets ripping their chest
Stumbling to their painful end, my friends.
Others caught the bullet while running away
Dropping lifeless in awkward heaps, my friends.

That narrowness of the passage, that absence of an exit were critical factors in making the Bagh a death trap for Dyer’s savagery. There is enough historical research to suggest that Dyer chose the Bagh for this very reason, to inflict maximum casualties, to teach a lesson and to instil fear. Going through that dingy passage was enough to put you in a sombre frame as you silently made your way towards the memorial.

After the renovation, the passage is brightly lit and lined with murals depicting an improbably cheerful set of persons making their way into the Bagh. The visitor’s mood is influenced by the martial beats of ‘Aye Watan, Aye Watan, Hum Ko Teri Kasam…’ as she goes through the passage. And yes, the murals are also great for selfies. Sombre reflection be damned.

We could argue over the interpretation of the murals. One explanation is that they portray ordinary people coming to celebrate Vaisakhi at the Bagh that fateful day. But the facts are different. Amritsar was already under tight restrictions following the police firing near the railway bridge on April 10. As Nanak Singh tells us, the people of Amritsar came to the Bagh in defiance of martial law, not to celebrate Vaisakhi.

Let me make one final point about the renovation. As we dragged our despondent feet back towards the passage to leave the Bagh, we were told off by the security guard. The passage was only meant for entering the Bagh. Hadn’t we seen the sign for an exit lane on the other side? An exit? Sure, what’s wrong with that, you may ask. Except for the inconvenient fact that there wasn’t an exit from the Bagh. And now there is. That’s how we treat history. And memory.

Nanak Singh, perhaps, was prescient when he employed a dose of sarcasm to echo the voices of our martyrs:

Make time to visit this Bagh of ours
Echoes tales of gallant souls, O friends.
With heavy heart, they mock our nation
Thanks so much for your love, O friends.
Look closely at our bodies sieved
A thousand wounds you’ll see, O friends.
You stayed at home, reveling in your life
And exiled us from your hearts, O friends.
How could you promise, and forget?
What a way to honour your words, O friends.

Unfortunately, that’s what we’ve done to the Bagh. Somewhere in our technology-driven vision of modernity, we forgot that this was about preserving the soul of a place that we have held sacred. The scepticism of my grandfather has been justified. And it hurts.

It didn’t have to be this way. I had made several visits to Jallianwala Bagh while working on the English translation of ‘Khooni Vaisakhi’ and always came away with a profound sense of disappointment over the way we abuse our heritage. The dusty bookcases, the plaster peeling in the visitors’ centre, the stinking toilets and the general air of apathy and neglect was all too visible. The need for a makeover was palpable and we were promised that it would be in place to mark the centenary of the massacre in April 2019.

The Jallianwala Bagh Trust had shared its extensive research on the period with the Ministry of Culture. Guru Nanak Dev University in Amritsar has strong departments of history and architecture to provide the requisite intellectual and technical backup for a project of this nature. But the task was assigned to Vama Communications of Ahmedabad, working in tandem with the Archaeological Survey of India (ASI) and the NBCC (India) Limited (formerly National Buildings Construction Corporation Limited), and the results are there to see.

It reflects both a missed opportunity and a deficit of imagination. Over the course of conversations with friends in Amritsar, I heard several suggestions that showed both ambition and vision. A senior professor at the university said that he had proposed making the Bagh a designated place for peaceful protests, like Jantar Mantar in Delhi. That might have been a balm for the martyrs who were asserting their right to assembly. Another friend, an eminent writer, suggested that the Bagh could become a place that embodies free speech, a bit of the Hyde Park Speakers’ Corner in Amritsar. That would consecrate the fact that the martyrs were protesting against the curtailment of civil liberties codified in the Rowlatt Act.

Or maybe that’s too idealistic. A bit like the martyrs who died for their country.

— The writer is a former diplomat. He translated Nanak Singh’s ‘Khooni Vaisakhi’ into English