BJP in UP, AAP in Punjab: Exit polls : The Tribune India

BJP in UP, AAP in Punjab: Exit polls 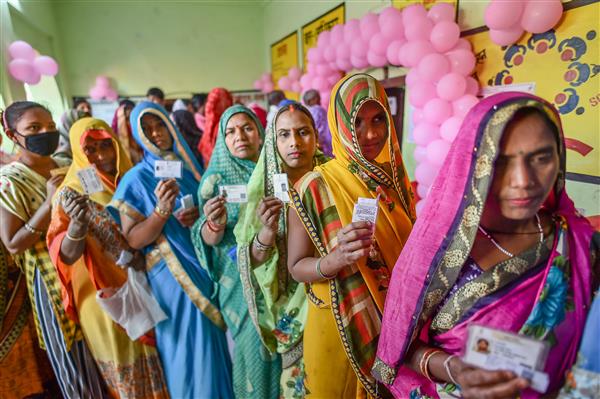 The Arvind Kejriwal-led Aam Aadmi Party is poised to win big in Punjab while the ruling BJP will retain Uttar Pradesh, although with a lower strength than in 2017, several exit polls predicted on Monday.

The Arvind Kejriwal-led Aam Aadmi Party is poised to win big in Punjab while the ruling BJP will retain Uttar Pradesh, although with a lower strength than in 2017, several exit polls predicted on Monday. The Assembly poll results will be out on March 10. 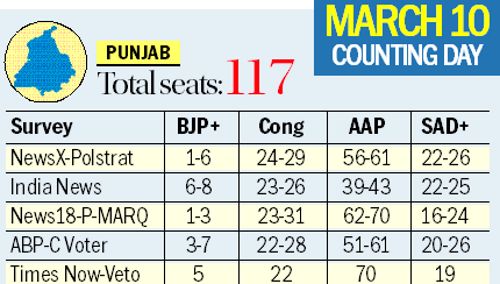 The aggregate of six exit polls—NewsX-Polstrat, India News, ETG Research, News18-P-MARQ, ABP News-C Voter and Times Now-Veto—has predicted a close fight in Goa and Uttarakhand and a clear edge to the ruling BJP and allies in Manipur.

A clear majority for AAP is expected in Punjab. The party could possibly win 66 seats, with the average taken from 51-61 (ABP News-C Voter) and 70 to 75 (ETG Research) seat projections. News24-Chanakya poll gave AAP a whopping 100 seats in the 117-member Punjab Assembly where the halfway mark is 59. The seats predicted for the Congress fall in the range of 22 to 33 seats in the state with News24-Chanakya giving the party just 10 seats, the lowest among all exit polls. The BJP and Capt Amarinder Singh-led grouping would be restricted to about 4 seats, while SAD could grab 19 seats, say the aggregate findings. 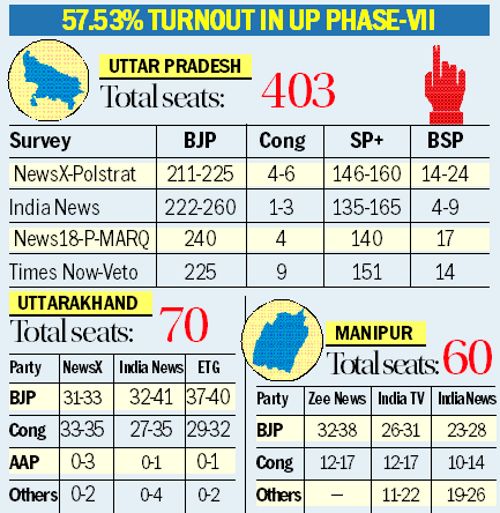 Going by these results, AAP would win its first major state, upsetting the Congress’ calculations majorly.

In UP, the exit poll aggregate gave the BJP a clear majority — 231 seats in the 403-member Assembly where 202 is the winning mark.

The exit poll predictions say the BJP would lose around 80 seats as compared to its historic performance in 2017, when it bagged 312 seats. The BJP’s return to power in UP, as predicted by exit polls, would be a first in over 30 years.

The exit polls are giving BJP challengers SP-RLD a combined average of 151 seats in the state with the BSP confined to 14 and the Congress shrinking further to 4. 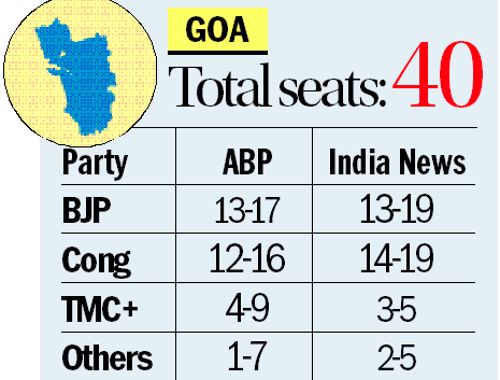 In 2017, the SP had bagged 47 seats, BSP 19 and the Congress seven. The projected numbers, if found correct on March 10, would mean the high-voltage campaign by AICC general secretary Priyanka Gandhi Vadra did not work at the hustings.

In Uttarakhand (36 is the simple majority in a 70-member House), which has a history of voting the incumbent out, the average findings gave the ruling BJP a slight edge with 35 seats as against 32 to the Congress, and AAP projected to win one seat.

In Goa, the exit polls predicted a close fight, giving 16 seats each to the BJP and Congress, three to the TMC and five to others. In Manipur, BJP and allies are set to win, show exit polls.