Naveen Shekharappa is a resident of Karnataka 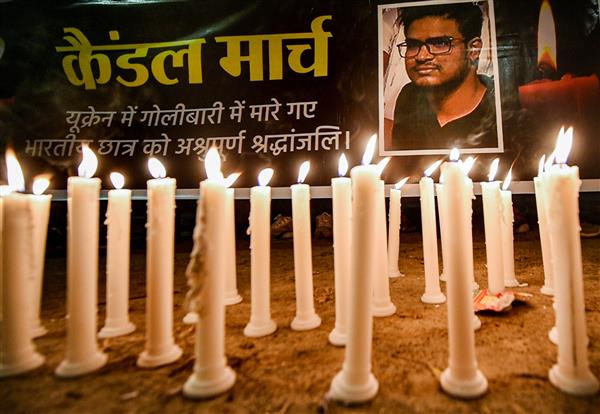 Candles being lit during a candle march of Indian Youth Congress to pay homage to Naveen Shekharappa, an Indian medical student who died due to Russian shelling in Ukraine's Kharkiv, in New Delhi, Tuesday, on March 1, 2022. PTI

An Indian student lost his life in Russian shelling in Kharkiv city of war-hit Ukraine on Tuesday, official spokesperson of the Ministry of External Affairs said.

Also read: Indian embassy did not reach out to students stuck in Kharkiv, alleges father of Karnataka boy killed in shelling

Former Miss Ukraine may have stolen hearts, but is she really fighting Russian forces? No she is not, explains her Instagram post

What makes Ukraine a hotspot for Indian medical students

In a tweet, Arindam Bagchi wrote: “With profound sorrow we confirm that an Indian student lost his life in shelling in Kharkiv this morning. The Ministry is in touch with his family. We convey our deepest condolences to the family.

With profound sorrow we confirm that an Indian student lost his life in shelling in Kharkiv this morning. The Ministry is in touch with his family.

We convey our deepest condolences to the family.

Manoj Rajan, Commissioner, Karnataka SDM, said: “We have confirmed from MEA the unfortunate demise of Naveen Shekharappa in #Ukraine. He was from Chalageri in Haveri."

As per reports, he had left for a nearby store to buy somethings. Later, his friend got a call from a local official that he (Naveen) has died, said Rajan.

A number of Indians are still stranded in Kharkiv where Russia has launched a major military offensive.

The MEA said the foreign secretary is calling in ambassadors of Russia and Ukraine to reiterate India's demand for "urgent safe passage" to Indian nationals who are still in Kharkiv and other cities in conflict zones.

"Similar action is also being undertaken by our ambassadors in Russia and Ukraine," the MEA said.

On Tuesday morning, the Indian Embassy urged all citizens, including students, to leave Ukraine capital Kyiv "urgently today, by trains or any other means available".

The government on Monday said that efforts to evacuate its citizens from Ukraine have been hampered by "adverse conditions" at the borders, but it has also offered to help evacuate citizens of neighbouring and other developing countries stranded there.

Kharkiv Mayor Igor Terekhov said that Russian troops continue to shell the city and have begun to blow up power substations.

Terekhov said on Ukrainian TV channels that the shelling of Kharkiv continues. More than 87 houses have been damaged. There are people who were trapped. Now we are eliminating these blockages.

"The invaders have begun to blow up the substations that supply us with electricity. Some districts of Kharkiv are already disconnected from electricity, and, accordingly, there are problems with water and heat supply. That is why I can tell you that what happened, and is happening in Kharkiv today is genocide. Not an operation but a war to destroy the people... This is a crime against the whole world," Terekhov said, Ukrainska Pravda reported.