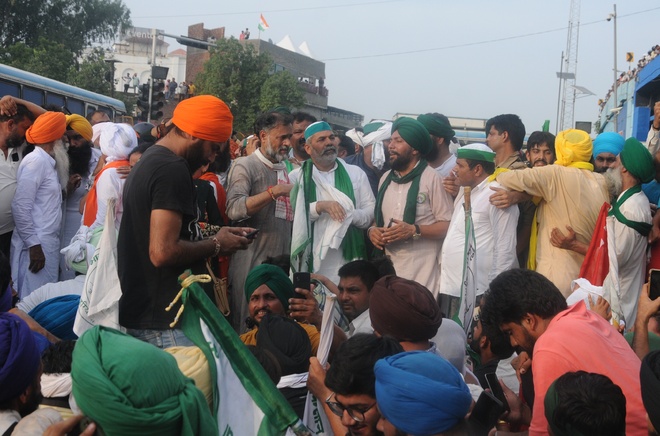 Karnal has now emerged as the new protest site of the SKM, with farm leaders announcing to continue their dharna outside the mini secretariat here for indefinite time.

‘Meagre’ MSP hike will be of little assistance: Farm unions

Farmers have erected tents for “pucca morcha” and their movement from different parts of the state continued today. Farmer leaders announced to stay put here for an indefinite time till the fulfilment of their demands.

After a daylong high-voltage drama, farmers laid siege outside the mini-secretariat on Tuesday evening after crossing over barricades. Farmers, led by Rakesh Tikait, Gurnam Singh Charuni and others, spent last night on roads and started their morning with enthusiasm.

Farmers will carry on their dharna outside the mini secretariat and more supporters will join from Haryana, UP and Punjab. The CM wants to shift the stir from the Delhi borders to Karnal. —Rakesh Tikait, Farm leader

Langar is being served to them by different gurdwaras. Besides, residents here extended their support to farmers by offering them fruits, water and other eatables. Volunteers of the SKM are also monitoring the situation closely and have installed their own CCTV cameras. Besides, two ambulances with emergency medical facility has been kept to facilitate the protesting farmers. Meanwhile, a farmer brought some makeshift structure for the stay of the farmers and their toilet facility.

“The government will not accept our demands. We will sit here till our demands are met. This is a struggle for the freedom of farmers from a government of corporates. Karnal will be another centre of protest like the Delhi borders if our demands are not met.”

“Farmers will carry on their “pucca dharna” outside the mini- secretariat and more supporters will join from different parts of Haryana, UP and Punjab,” said Tikait while addressing the gathering.

“The CM wants to shift the agitation from the Delhi borders to Karnal,” said Tikait.

Charuni has urged the farmers and the SKM leaders to ensure the presence of the gathering in their areas round the clock. “We will not lift our dharna till the fulfilment of our demands,” he said.

On the issue of court arrest of the farmers on Tuesday, Tikait, while addressing the gathering, said the administration could have declared the grain market as a jail. He gave the example of Mumbai where the Azad Maidan was converted into a jail for around 60,000 protesters.

Amid the speeches by the farm leaders, protesters, including youths enjoyed hukkah. Some of them were seen playing cards to pass their time. Scores of volunteers were busy maintaining discipline.

The Karnal administration has set up a temporary health centre for farmers and cops near the dharna site in Sector-12. Health staff have been deployed and medicines provided. Six ambulances have been stationed at the site.