Against political rallies before official declaration of state election 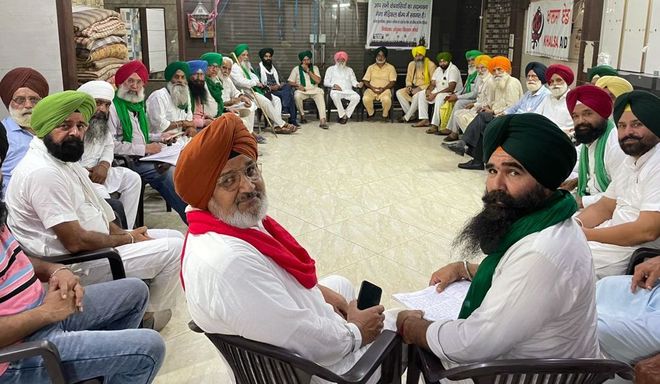 Leaders of 32 Punjab farm unions during a meeting at the kisan andolan office at the Singhu border on Wednesday.

Leaders of 32 farm unions on Wednesday gave a call to all political parties, except the BJP and its allies, in Punjab for a meeting at Chandigarh on Friday.

This was decided in the meeting of Punjab’s 32 farm unions held at the kisan andolan office at the Singhu border on Wednesday.

Kulwinder Singh Sandhu, general secretary, Jamhoori Kisan Sabha, said the political parties, especially Shiromani Akali Dal (SAD), were busy holding big rallies in the state, which wasn’t acceptable before the official declaration of the polls by the Election Commission of India. But the farmers discussed that this?

act of the political parties would disturb the atmosphere in Punjab and also affected their ongoing agitation.

That’s why the 32 farmers’ groups have decided to hold a meeting with the political parties to stop all such activities in the state till an official declaration of the state elections was made, he added.

Harinder Singh Lakhowal, general secretary, BKU (Lakhowal), said it was decided that a meeting with the leaders of all political parties would be organised at Chandigarh at 11 pm on Friday.

Besides, the farm leaders have given 10 days to the Punjab Government for the cancellation of the criminal cases registered against the farmers in Moga and Machhiwara.

All farm union leaders have decided to strengthen the farmers’ protest at the Delhi borders. They also decided to intensify the protest at Karnal, BKU (Lakhowal) general secretary Harinder Singh Lakhowal said.