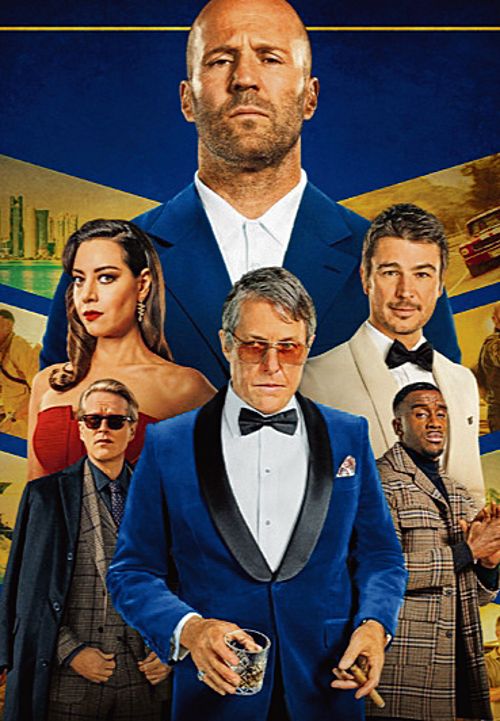 Guy Ritchie-Jason Statham open the first big-ticket account of 2023 in cinemas. Operation Fortune: Ruse de Guerre is a typical globe-trotting, posh comedy-actioner. The good and the bad struggle over something that could change the world forever, and there are 20 billion dollars at stake!

It all begins with a robbery at the British government’s highly secured safe space, and no one has a clue on what was stolen or who has done it for whom. But it cuts short an elite superspy Orson Fortune’s (Jason Statham) vacation to figure it all out.

Orson is pricey but his clever, cunning and unconventional ways make him best suited for the job. His regular teammate can’t be trusted, so the key government aide Nathan Jasmine (Cary Elwes) gets Orson a new team that includes Sarah Fidel (Aubrey Plaza) and J.J. (Bugzy Malone). Sarah’s tech expertise and J.J. being rather good with the dogs and his aim makes them a formidable team. But they are not the only ones chasing the culprit! Their wily plan involves Hollywood heartthrob Danny Francesco (Josh Hartnett) to get them an entry into dealer Greg Simmonds’ (Hugh Grant) den — a fundraiser for war orphans on a plush yacht.

The film follows a chase across Madrid, Los Angeles, Turkey, Cannes and Doha, with slick action, serene seas and colourful bazaars. Trust Statham to nail the action sequences. Josh Hartnett as a lost actor on how to play ‘self’ in a do-or-die situation offers comic respite. Aubrey Plaza as a modern woman — a beauty with brains Sarah announces loud and clear that women today are a force to reckon with. Hugh Grant, who has sailed many a romcom to success, plays a billionaire with devious greed, who gives a lesson or two to ‘lost’ Danny in the movie-making business!

The film struggles to tick all the right boxes — rogues don’t belong to a particular race, black is right and women as capable if not more than their male counterparts! There is an Anita too at a government position. Yes, there is mention of Ukrainians but lip-service is done by making the baddie donate the money for the charity that supports war orphans. The pace of the film is leisurely, expect about two or three sequences that set hearts racing, the screenwriter gives ample time to guess. The music by Christopher Benstead befits the pace.

Guy Ritchie plays safe with his fifth outing. The thriller takes you around the world that’s full on opulence and opportunists. At 114 minutes, Operation Fortune: Ruse de Guerre — French for a war strategy — with a staple car chase to helicopter action sequences makes for a decent watch. — Mona