Touching upon a taboo topic with a dash of humour and emotion, Chhatriwali is definitely a one-time watch : The Tribune India

Touching upon a taboo topic with a dash of humour and emotion, Chhatriwali is definitely a one-time watch 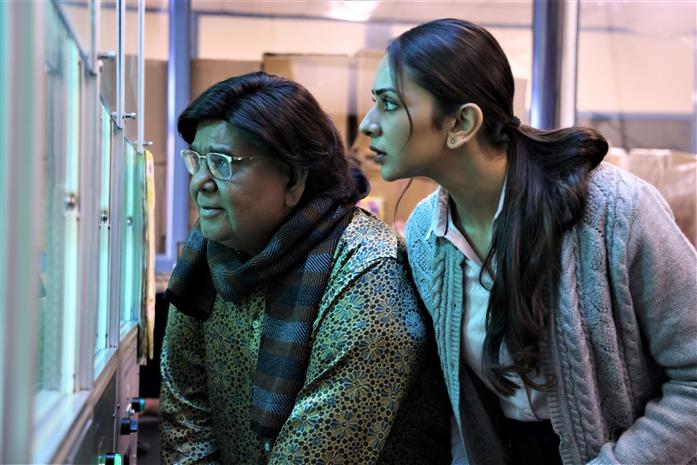 A clever chemistry post-graduate living in a dilapidated house with the responsibility of a younger sister and mother, a barahavin fail good-hearted dude from a sanskari parivar running a puja bhandar; they meet, fall in love and start a life together. Only hitch, the Indra Nooyi of Karnal doesn’t work in an umbrella factory but one for condoms!

Even in the times of Tinder and OYO rooms, reportedly condom usage in India remains as low as 5.6 per cent! Talking about safe sex is still a taboo and people with the thinking ‘condoms are for lovers, not for the married couples’ still around. So, we don’t mind another outing after Helmet and Janhit Mein Jaari were made on the same theme.

Tejas Deoskar’s directorial begins on a strong note, giving us endearing characters such as Ratan Lamba (Satish Kaushik), owner of a condom manufacturing factory, struggling hard to find a quality control head; Dhingra ‘Aunty’ (Dolly Ahluwalia), playing Flash while aiming to be Ambani and perky Sanya (Rakul Preet Singh) flying kites and using it as a ploy to enlist more children into her tuition class. Her leaking roof forces her to accept the position in a condom manufacturing unit, which she keeps a secret from the family while claiming that she worked in an umbrella unit.

Love follows and she becomes the daughter-in-law in a sanskari family, where chadar se jyada Mata Rani ki chunari hain.

Written by Sanchit Gupta and Priyadarshee Srivastava, it’s a simple story in which Rakul Preet Singh gives a delightful performance as a girl shy of her work profile to realising its worth and ready to put up a fight for a cause she believes in. Sumeet Vyas delivers what’s doled out to him. It’s Rajesh Tailang, who gets a meatier part, and he gives a fine performance. Dolly Ahluwalia offers promise but she doesn’t get much scope.

Madan Chemist (Rakesh Bedi) also represents a societal stereotype. One loves Satish Kaushik, who is an affable uncle. Music comes with fixed trope—a title track, romantic number, a sad song and theme song—each done by a different composer. While the film doesn’t look at alternate methods of birth control, still one appreciates the theme; birth control to date remains a woman's issue across the world. At about two hours, Chhatriwali makes for a decent one-time watch.