Albeit there are some cliff-hanger moments and slick action, the story of Brahmastra does not generate the requisite adrenaline rush : The Tribune India

Albeit there are some cliff-hanger moments and slick action, the story of Brahmastra does not generate the requisite adrenaline rush 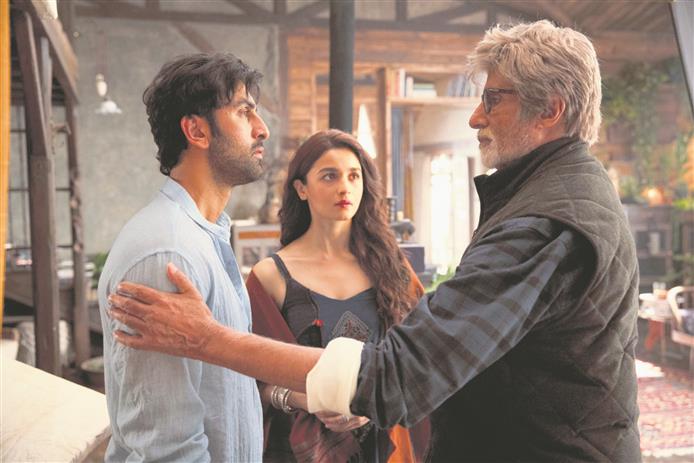 On the face of it, Brahmastra looks like India’s answer to MCU (Marvel Cinematic Universe). But, is it? Well, like most superhero origin movies, our Shiva (Ranbir Kapoor) too is not aware of his super-heroic prowess. What it is, those of you have seen the trailers needn’t be told. For the unversed he is agni-astra, which means he can bid fire to do his bidding. Till he discovers the full potential of his latent energies, he falls in love at first sight, takes care of a brood of orphans and has these vivid dreams bordering on phantasmagoria that lead him to real people, who like him are blessed with astras, and those out to destroy the world.

The best part of the film is it has our favourite superstar Shah Rukh Khan playing a scientist with a deep connection to Brahmastra. The King Khan, who has been missing from screen for quite some time, has not lost one bit of his swag and in a brief cameo delights us as much with his lines as his levitating action.

Can the same be said about the film? Of course, as the film opens, Ranbir’s unflappable energy matches that of his character, DJ Shiva. He lip syncs to catchy Kesariya (music by Pritam is foot-tapping) and dances as well as only he can, and Ayan lays the visual language thick and spectacular.

Indeed, both the cinematography and the VFX effects create a spectacle as befitting the texture of the film that takes us from Varanasi to Himalayas. And the colourful flavours of our land manifest in vibrant hues. A superhero film steeped in our very own cultural moorings was long overdue. But intriguing as our culture and mythology is, Ayan fails to tap into the intrigue factor or the complexity of our traditional fables and focuses more on the surface gloss.

So razzle dazzle it is further enhanced by star power of heavyweights like Amitabh Bachchan and Southern supremo Nagarjuna Akkineni. Only Bramahmansh run by Guru (Bachchan) could well be any gurukul, except the inhabitants here can swivel their arms and create weapons out of nowhere. Even some of the astras are named after our mythological figures like Nandi astra, which belongs to Anish Shetty (Nagarjuna deserved more).

Despite the obvious reference to our ‘astraverse’ and constant reminder of how light can vanquish darkness, Brahmastra and its three parts could well be a page out of Avengers and the impending doom if and when three parts come together, reminiscent of the power of Thanos’ stones.

However, were we to drop the fair/ unfair comparisons with movies from Marvel and DC Universe, we must grant it to Ayan that he keeps us engaged in the first half. The second half, despite a twist in Shiva’s parentage story, is not even half as exciting. The climax , far too drawn out and anti-climax with some mumbo jumbo about power of love conquering all, is rather disappointing. As it is by then, the fight between good and evil (Mouni Roy with her flashing red eyes seems to have been dropped straight from television sets) has gone on and on. The so called cliff-hanger moments do not bring the requisite adrenaline rush. Rather the action pre-intermission has more edge-of-the-seat thrill.

Ranbir carries his part lover-boy part ‘yodha’ part with earnestness. His chemistry with Alia Bhatt, now his real-life wife, is palpable. But what truly grabs our attention is Dev who only appears as an apparition… Who is he, what exactly is he? There are only flashes of his tantalising backstory. Well, the makers are confident enough to promise a part two, the story of Dev, and we are all ears and eyes. And that is some triumph for a trilogy whose present outing feels more like a classic case of untapped possibilities.