Scale of the YRF outing notwithstanding, Shamshera fails to impress due to its lazy plot and lack of emotive appeal

A still from Shamshera

We know escapist cinema is the toast of both Indian film industry and the viewers right now. So you can’t judge the flight of fancy and suspension of disbelief that mark Ranbir Kapoor-starrer Shamshera in the typical good-old fashion. A period film that harks back to the rules of old-school-world of dacoits...No problem. But, the problem is the film in which once again the brave hero takes on the mighty bad men comes after RRR. And as it too takes us to the pre-independence period, actually 1800’s, it just can’t beat the Rajamouli brand of entertainment. 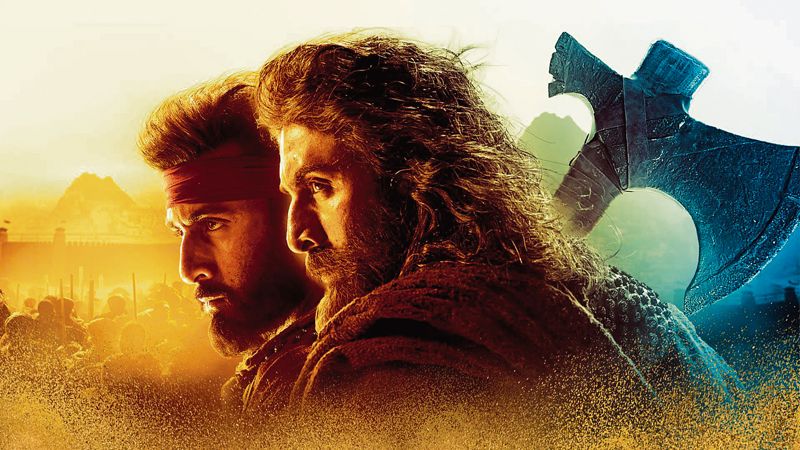 Yes we are on familiar turf, it’s the British Raj where we are told a warrior tribe is so marginalised that it has taken to arms to loot the rich. And help the poor a la Robin Hood. Its credo line runs Karam se Dakait aur Dharam se Azad. Only, soon enough the very azadi of the brave brigade is under threat. No prizes for guessing the tribe leader is the fearless Shamshera (Ranbir Kapoor), who in a rare moment of vacillation squanders away the freedom of his people.

What follows hereafter reminds you of another South-Indian blockbuster KGF. En masse, the people of the tribe are enslaved in chains. Treated worse than animals, they have been imprisoned in a fort in fictitious Kaza. Redemption is in order, but can wait 25 years to justify the double role of Ranbir Kapoor as father and son. But surprise, surprise the villain of the piece here is not so much the British officer, but the vileness personified Indian policeman Shudh Singh. Played by Sanjay Dutt, now this bad man has every mean bone there possibly is and not even a single redeemable shade.  Interestingly, while Sanjay’s character bordering on caricature is all black and reminds you of all the baddies of yore replete with a loud guffaw, but the British officer is a tad gray. Though the film hinges on the azadi of this tribe, it has very little to do with any feeling of patriotism or nationalism. Rather it deals with another scourge of our system - casteism. Once again expect no subtlety or nuance only surface-level treatment...Yeah, well, the film could have been placed in any era.

Not to say that it does not capture the period feel. Thanks to our very own Chandigarh boy and Government College of Art alumnus cinematographer Anay Goswami, cinematography is noteworthy. Be it the vast expanse of the landscapes or the crafted sets, the camerawork does full justice to the background and uplifts the film, whose story is otherwise so much ‘been there seen it all.’ Done and dusted. However, the dialogues by Piyush Mishra, especially those uttered by talented actor Saurabh Shukla, have that bombastic feel in sync with the mood and timbre of the film. Among the cast, another actor that stands out is Ronit Roy.

As for the star we have waited with bated breath for the last four years...Well, Ranbir Kapoor in a double role carries the intensity and goofiness of his parts with both conviction and aplomb. Welcome, Ranbir to the big screens after a hiatus of four years, only if the outing had more gravitas or substance or even ‘manoranjan’. Lest we forget don’t we have the beauteous dancer Sona (Vani Kapoor) for that. Vaani looks fetching but at the same time too contemporary to fit the period setting. But we all know with a couple of dance numbers in tow that she is there purely for manoranjan ke liye.

Now the all-important question is how much does the film score on the entertainment meter? Depends entirely on what your expectations from a massy entertainer are? Lower the bar and it could pass muster. Yes, the scale as befitting an YRF film is grand, the action grander. The heist scenes, especially the way Queen’s crown (don’t hold your breath, anything can happen in Hindi cinematic universe) is stolen, are skilfully executed. But the lazy plot lets the pain inflicted on the tribe make us wince too. And we are not saying so by way of compliment. In fact, the film even in its most momentous moments has zilch emotive appeal.

While the splendour of Shamshera will get to you, its sluggishness in middle parts and the contrived, rather long, climax gets under your skin.