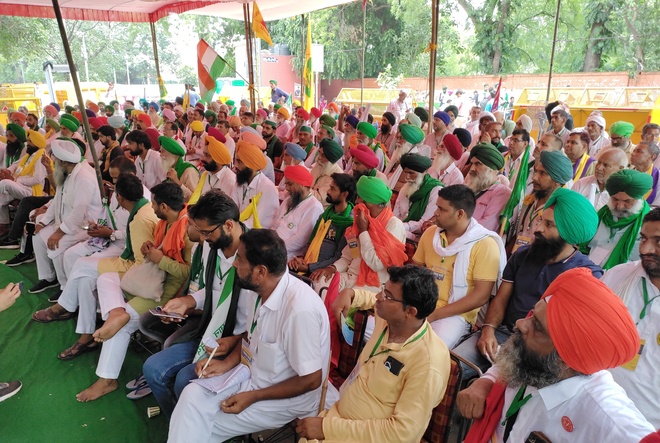 Farmers during their Kisan Sansad in New Delhi. Mukesh Aggarwal

The second day of Kisan Sansad at Jantar Mantar saw the “resignation of the designated agriculture minister” following a debate around the ‘APMC Bypass Act’. The protesters also condemned Union Minister Meenakshi Lekhi for her “outright illegal and casteist slur” for farmers.

The Samyukt Kisan Morcha (SKM), which organised the Kisan Sansad, rejected her statement where she withdrew her remarks, calling it “simply unacceptable and unpardonable”.

The Kisan Sansad today had six ‘Speakers’ and ‘Deputy Speakers’ for three sessions of the ‘House’. As many as 200 farmers associated with the SKM participated in the ‘proceedings’ that included a ‘Question Hour and a debate’. “Playing the agriculture minister, Ravneet Singh Brar resigned after failing to answer the questions of the members,” the statement said. The sansad also passed a unanimous resolution on “adverse experience of the operation of the APMC Bypass Act from June 2020 to January 2021 before the Supreme Court suspended the implementation”.

The resolution stated that “farmers need much higher number of operating mandis and not less mandis” and called for “a repeal of the central act immediately”.