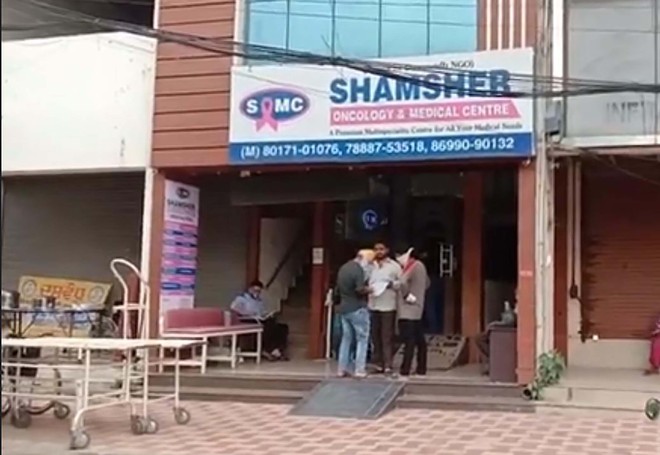 Adopting a tough stance against a private hospital over alleged malpractices in the treatment of a Covid-19 patient, Deputy Commissioner Ghanshyam Thori on Tuesday suspended Level-II Covid Care facility (for new admissions) at Shamsher Hospital.

Adopting a tough stance against a private hospital over alleged malpractices in the treatment of a Covid-19 patient, Deputy Commissioner Ghanshyam Thori on Tuesday suspended Level-II Covid Care facility (for new admissions) at Shamsher Hospital. A preliminary report submitted by the health authorities flagged malpractices and overcharging.

The DC said a complaint was filed by family members of a patient, who died in the hospital’s Covid care ward, following which an inquiry was marked to Deputy Medical Commissioner Jalandhar, who recommended suspension of Level-II facility for new admissions. The DC further formed a four-member committee to probe other discrepancies such as overcharging, drug procurement, distribution and others as alleged in the complaint within a period of three days.

As per complaint, a patient was rushed to Shamsher Hospital, where he was admitted to Level-II Covid care ward without RT-PCR test. The patient was also given treatment which is only given in Level-III that too in consultation with expert group. The complainant also levied allegations of overcharging of medicines and injections, which was also a matter of investigation. The DC has directed the committee to furnish inquiry on all such points and submitted a detailed report within three days. The committee comprised Sub-Divisional Magistrate-1, Civil Surgeon, Sonal Licening Authority, and Dr Ashoke, Senior Medical Officer, Wadala.

The DC warned all healthcare institutions against resorting to malpractices in the time of crisis.

Covid status of patient not confirmed