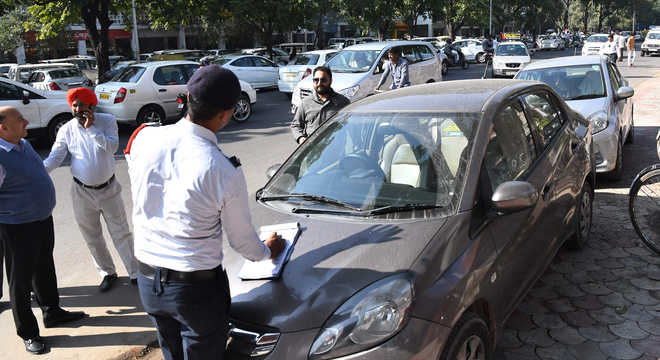 The UT traffic police have so far collected around Rs1.59 lakh as fine by the visiting the residences of traffic offenders who were issued traffic violation information slips (TVIS) or postal challans but did not pay the penalty. - File photo

The UT traffic police have so far collected around Rs1.59 lakh as fine by the visiting the residences of traffic offenders who were issued traffic violation information slips (TVIS) or postal challans but did not pay the penalty.

High pendency of TVIS challans due to non-payment drove the police to launch a campaign to recover the fine from traffic violators.The police have recently started visiting the offenders at their address within Chandigarh to recover fine from them.

Palak Goel, DSP, Traffic (Administration), said the initiative led to a payment of around Rs1.59 lakh till July 23.

As per the police records, the cops have visited the houses of a total of 228 traffic violators.

Meanwhile, efforts of cops to visit 87 addresses proved futile due to absence of complete information of vehicle owners, as either the traffic violator had shifted from the given address, sold the vehicle or had passed away.

The police said 80 traffic violators, who had been traced, were unable to pay the fine due to some reason. However, they promised to pay it soon by visiting the Traffic Lines in Sector 29.

Two teams, each having two members, have been constituted to visit the offenders’ residences. The cops are equipped with body cameras to record their visits.

The police said the drive to recover the fine dues would continue.

A large number of people have been issued e-challans for speeding through automatic number plate recognition (ANPR) system.

The other most common violations captured on CCTVs include stopping vehicle on the zebra crossing.