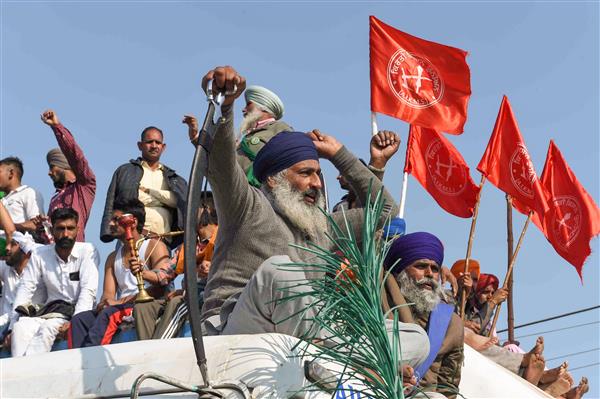 Farmers during a protest against the newly passed farm Bills, at the Singhu border near Delhi. PTI

Jathebandis at Singhu border on Monday said they will continue to hold on to their position at the borders.

Their stand on the three Act, Ordinance and Power Act is “non-negotiable” they said, asking Prime Minister Narendra Modi to listen to farmers ‘ maan ki baat’ or else the government “will have to pay dearly”.

“Our only demand is that these Acts are taken back....it is non-negotiable and we will ensure that, happens,” leaders of various Kisan Sangathan added, addressing a press conference at Singhu border.

“No formal invitation meeting has been sent for December 1 so far,” they said, adding that they will go for meeting but with the conditions put by them.

Farmers also got support from transporter associations and khap panchayats of Haryana.

It is not a Punjab agitation but of entire country, they said.

“They keep talking on phone but there has been no communication on phone....that is why we say ‘muh main ram ram bagal main churi... (Home Minister) Amit Shah has said we will talk but will they talk unconditionally,” they said in response to whether they will go for talks with the Central government.

Slamming the government for claiming that farmers are being misled and that it is an ‘arthiyas’ agitation, Sanyukt Kisan Morcha leader Yogendra Yadav said it now “stands exposed”.

“Punjab farmers have taken a lead but farmers from entire country are participants in this agitation,” he said.

Punjab’s 130 organisations are meeting every day and Sanyukt Kisan Morcha is coordinating this agitation, Yadav said slamming the government for calling it a “leaderless” agitation.

The same organisations had challenged Amarinder Singh government, he said terming it a “lie” that it was being propelled by the Congress.

“We want to tell Narendra Modi that if they (government) think that if they stretch it long our resolve will weaken, let me tell....and  this is our warning... that he should resolve the situation at the earliest otherwise we may have to take a harsher step,” Gurnam Singh Charuni said

“Our PM says something but does something else. He is selling the country to corporates,” Balbir Singh Rajewal said urging countrymen to participate in peaceful agitations.

“Those who want to stay in Burari can do so. They should ensure that cleanliness is ensured at Burari. We have resolved that we are ready to die of corona but not willing to retreat,” they said.