The fourth and final Test gets underway on Friday at Brisbane 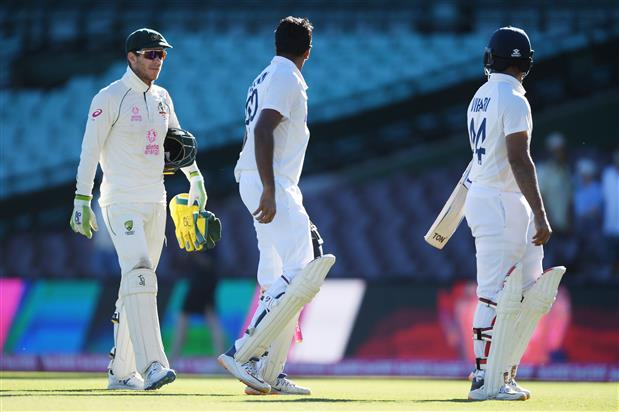 Australia captain Tim Paine speaks to Ravichandran Ashwin and Hanuma Vihari after a draw on day 5 of the third cricket Test match. Reuters

Legendary wicketkeeper Ian Healy feels “desperate and petty” Australian team over stepped the mark with its on-field behaviour on the final day of the Sydney Test.

The 56-year-old also lashed out at Australia skipper Tim Paine for sledging India’s Ravichandran Ashwin on the final day.

Paine, was involved in a verbal duel with Ashwin, while the Indian off-spinner was batting. The Australian skipper went on to say that it was all part of the game at the post match press conference. However, Healy disagrees.

“He’s wrong. It’s not all part of the game. There’s a thing called the preamble to the laws of cricket and it is a thing that was designed by Sir Colin Cowdrey and it’s about how you play cricket and how you’re supposed to play cricket,”

Paine has since apologised for his behaviour, saying that his leadership wasn’t good enough and he ended up “looking like a fool” by sledging Ashwin.

Despite not being able to clinch what looked like an easy win for Australia and concerns around David Warner’s fitness and participation in the Brisbane Test rising, Healy feels the home team will “get it together”.

“The bowlers were fantastic, I wouldn’t be splitting them up, I’d be giving them a chance in three days time to get that right and really enjoy Brisbane,” he said.

“Don’t split them up. I thought the bowling was fine.

“Wade’s position will come into question, Warner, was he fit enough, there’ll be some chaos painted, but I think Australia will galvanise and get it together,” Healy added.

India snatched a remarkable draw in the third Test against Australia in Sydney to keep the series alive at 1-1.

The fourth and final Test gets underway on Friday at Brisbane. — PTI