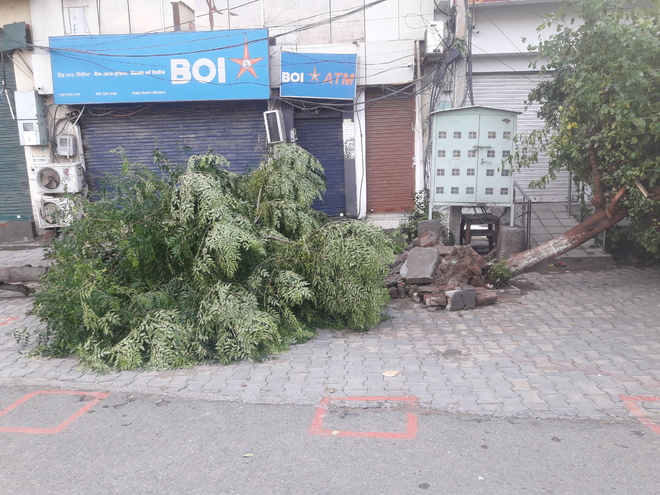 The two trees that were uprooted by strong winds in Tarn Taran on Saturday night. Photo: Gurbaxpuri

Rain lashed the city on Saturday night, leading to waterlogging in some areas of the city. No waterlogging was seen in main markets due to the timely desilting of major sewer lines or rainwater channels. However, there were some areas where rainwater remained accumulated till this afternoon.

The storm sewerage laid alongside the track of the Bus Rapid Transit System (BRTS) has not been functioning properly since its beginning. The BRTS track was also waterlogged in various areas. The choking of storm sewerage along the BRTS track had led to road cave-in on the Mall Road two years ago. Apart from the BRTS, the faulty design of the elevated road also led to water accumulation at some places, including the start of slope near Alpha Mall.

The potholes on the road from Gate Hakima to Central Jail Fathapur were filled with rainwater, causing undue inconvenience to devotees visiting Gurdwara Baba Budha Sahib Jhabal on Sunday morning. Similarly, Jhabal Road is also in a bad state. Besides, the road from Ajnala Road to Gumtala via Tabowali and Malawali villages was also waterlogged.

Hardeep Singh, a resident, said, “The main roads, where the desilting work was carried out by the MC a few days ago, did not witness waterlogging, but the situation was totally different on internal roads where potholes were filled with rainwater, causing inconvenience to residents.”

On the other hand, the residents got the much-needed respite from the scorching heat. “Cloudy skies will further provide succor to residents who were reeling under the scorching sun. The weather is pleasant. We are expecting more rain as black clouds are hovering,” said Naveen, another resident.

Tarn Taran: Heavy rain, which lashed the district on Saturday night, has brought cheer to farmers as rain is very beneficial for the paddy crop at this time. But gusty winds caused heavy loss to Powercom as a large number of electric poles and transformers fell down. Power supply was disrupted to many areas.The heavy rain, which was reported from the whole district, also came as a blessing for Powercom as it was unable to supply the required electricity to farmers and there were reports of paddy fields going dry in different parts of this border district.

Sukhwinder Singh, a resident of Sabhra village, said the rain affected power supply in Tarn Taran, Patti and other urban localities of the district.

Jatinder Singh, Deputy Chief Engineer of the local Powercom circle, said a large number of electric poles and transformers fell down in the area. — OC