CHANDIGARH:Maharashtra’s Salsa Aher continued her impressive run in the CLTA-AITA National Ranking Tennis Championship as she upset third seed Kashish Bhatia of Delhi to book a place in the women’s singles final here on Thursday. 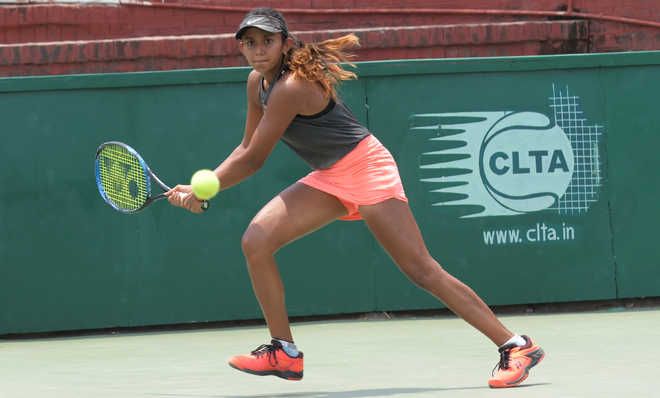 Maharashtra’s Salsa Aher continued her impressive run in the CLTA-AITA National Ranking Tennis Championship as she upset third seed Kashish Bhatia of Delhi to book a place in the women’s singles final here on Thursday.

Salsa won the opening set 6-1, but Kashish came back strongly in the second set and took a 4-1 lead. Salsa though clinched the next three games on the trot to make it 4-5. In 10th game, Kashish hold her serve and finally seized set 6-4 to restore the parity.

In the decider, both players displayed some great skills and were tied 5-5 before Salsa closed the set 7-5 to set up the title clash with Vutukuru Lakshmi Sahithi Reddy. The Andhra girl stunned fourth seed Sravya Shivani C of Telangana 6-4 6-3 in the semis.

Salsa, in company of Kaavya Sawhney, also moved into the women’s doubles semifinals. The duo registered a 6-0 6-4 win over Sanya Yadav and Ananya Yadav in the quarterfinals.

In the men’s singles, third seed Dalwinder Singh of Punjab moved into title round after VM Ranjeet retired mid-way through the semifinal clash. Dalwinder was leading 6-4 1-0 when the second seed from Tamil Nadu decided to concede the match.

In the other semifinal, top seed Mohit Mayur was leading Suraj Prabodh 4-0 when the latter decided to concede the match following some injury concerns.

Mayur later combined with Oges Theyjo J to dismiss LR Balaji and Kavin Masilamani 6-3 6-0 in the men’s doubles semifinals. In the final, the duo will meet Atharva Sharma and Hardeep Singh Sandhu, who registered a 3-6 7-6(2) 10-5 win over Calvin Golmei and Megh Bhargav Patel.