The Saudis, the spiritual mentors of Wahhabi extremism, are busy blowing up Yemen to worry about the ISIS. France can’t arm twist them as it is trying to displace the US as their weapons supplier. 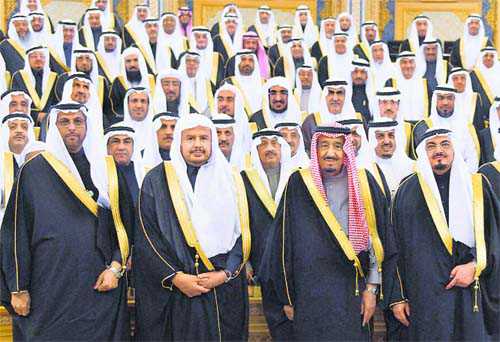 The country which lent its Sunni-Wahhabi creed to the Isis killers of Paris will care nothing for François Hollande's huffing and puffing about war. The Saudis have heard it all before, this New World Order stuff, way back in 1991 when George W Bush dreamed up the sub-Hitlerian expression for the Middle East he thought he could produce: an oasis of peace, a place of weaponless wealth in which swords would be turned into ploughshares - or at least into bigger oil tankers and longer pipelines. The Saudis are far too busy blowing up bits of Yemen in their crazed war against the Shia Houthis to worry about the Sunni-Wahhabi crazies of Isis. Their enemy remains America's new best friend - Shia Iran - and they are as keen as ever to dethrone the Alawite-Shia President of Syria, even if Isis is in the front line against Bashar al-Assad. They know that French foreign policy has favoured Saudi trade and that billions of dollars' worth of US military supplies will still flow to the kingdom despite their countrymen's links to the cult which destroyed 129 lives in Paris.
The US doesn't care to curb the kingdom's ferocity. It has largely stopped bombing Isis — surprise, surprise — but desperately needs more weapons after burning up its arms inventories on the poverty-stricken Yemenis. The proposed weapons deal — already approved by the US State Department — includes Boeing direct attack munitions and Paveway laser-guided bombs from Raytheon. The Houthis, needless to say, still control a lot of Yemen, including the capital Sanaa, even though the Iranian military assistance to them - much trumpeted by the Saudis - is mythical. Human rights groups have long accused the Saudis' air strikes of indiscriminately killing civilians - the UN put the total civilian dead at 2,355, each one, of course, as precious as the 129 lives destroyed in Paris on Friday.
The Americans - and the French - would presumably like the Saudis to kill 2,355 members of Isis, but that is not to be. The US Congress has already permitted Obama to sell another 600 Patriot PAC-3 air defence rockets — putting £5.4bn in Lockheed Martin's pocket — although the Houthis have not a single aircraft in their possession. The missiles are presumably intended to protect Saudi Arabi from the Iranian air attack that no one in the Gulf really believes will ever take place.
As for France's new emergency laws, they will bother neither the Saudis nor any other Arab nation. In a Middle East in which the local dictators, kings and emirs - almost all of them the West's allies - regularly spy on their citizens, tape their telephones and torture their own people, no one is going to care if the new Hollande laws restrict the egalitéor liberté of the people of France. For the Saudis, the family battle between the Crown Prince and Interior Minister Mohammed bin Nayef, and the 30-year old Defence Minister and deputy crown prince Mohammed bin Salman bin Saud — who has led the disastrous Saudi bombing of Yemen — is of far more interest than the future of Isis.
And of far more interest to France will be its own lucrative arms deals with Saudi Arabia, where Hollande still hopes - forlornly, one might add - to supplant the US as the kingdom's main arms supplier. He may think he's "at war" with Isis - but the spiritual mentors of the so-called Caliphate will be left untouched.
The Independent
SHARE ARTICLE