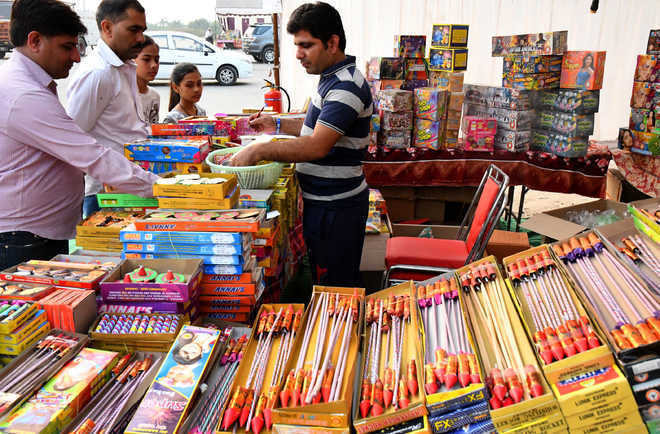 The district administration has issued licences to only 16 shopkeepers for setting up firecracker stalls at designated Multipurpose Sports Stadium in the city, but almost 80 stalls have been put up there in violation of norms.

Not caring about the rules and regulations, most stall owners have not arranged for water, sand buckets, fire extinguishers, blankets and other material required under the safety norms.

Following the directions of the Punjab and Haryana High Court, the administration had decided to issue the same number of licences for the sale of crackers as were issued last year, but it seems that the directions have gone up in smoke and that too directly under the nose of the district administration.

The stall owners, who have got the licence through a draw, today alleged that on paper licences had been given for stalls to 16 persons only, whereas a large number of sellers without any valid licence had been given space illegally at the stadium.

“This is not a new phenomenon here. Most of the cracker sellers never get a licence. You may term it an illegal business, but this is the way firecracker market is run here every year,” said a wholesale dealer of crackers running his business without a licence.

Deputy Commissioner B Srinivasan said, “A total of 34 licences have been issued in the district for firecrackers stall.” When asked how a large number of stalls had come up in the stadium, he said he would get it checked.