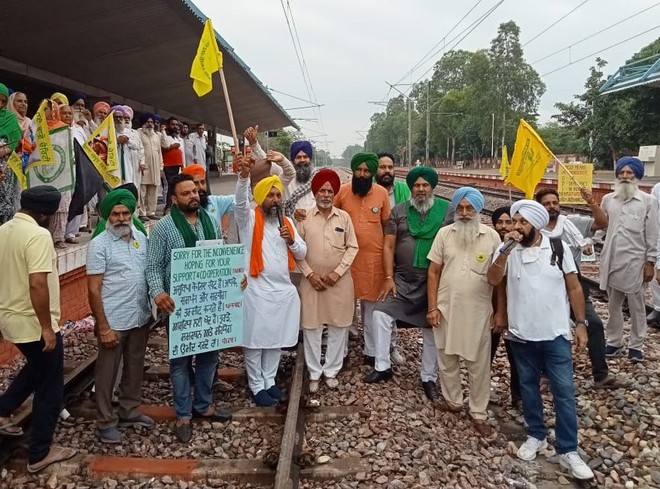 Farmers hold a protest on a track at the railway station in Mohali on Monday. photo: Vicky

On a call of the Samyukta Kisan Morcha to protest against the three farm laws, farmers blocked the Chandigarh-Morinda railway line in Mohali, disrupting the rail services today.

A large number of farmers, along with their families, from Mohali and the adjoining areas gathered at the Mohali railway station and staged a dharna on the rail tracks.

Addressing the protesters, social activist Manjeet Singh said the farmers had been fighting since long demanding a repeal of the three farm laws. Instead of listening to the farmers, the government was making plans to defame the farmers’ struggle.

He said the farmers would never let the Central Government succeed in its nefarious designs. The struggle would continue till the dismissal of Union Minister of State for Home Affairs Ajay Mishra Teni, repeal of the three farm laws and fulfilment of other demands of the farmers. The struggle would be intensified in the days to come.

Speaking on the occasion, various farmer organisation leaders said the farmers blocked the railway tracks demanding the removal of Union Minister of State for Home Affairs Ajay Mishra Teni from the Cabinet in connection with the murder of farmers at Lakhimpur Kheri.

They said it was unfortunate that no action had been taken against him in connection with the killing of farmers at Lakhimpur. This had resulted in great resentment among the farmers.

Gurnam Singh Dau, while addressing the farmers on a railway track in Kharar, criticised the Central Government for its insensitiveness towards farmers’ demands.