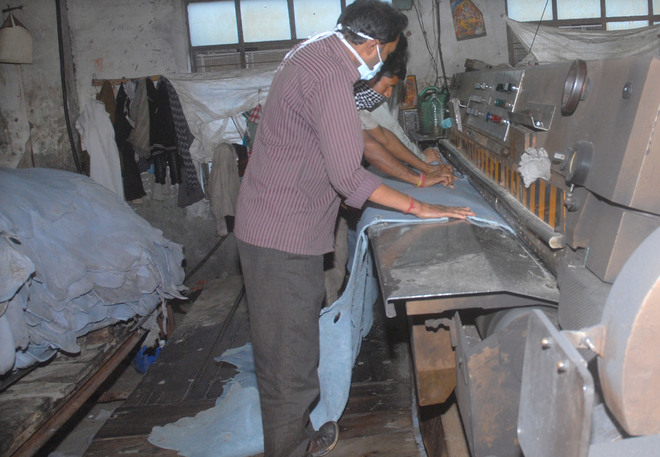 The issues of the leather complex in the city do not seem to be getting settled any time soon. Even as the district administration has issued the Letter of Intent to Chennai-based agency M/s Eco Protection Engineers Pvt Ltd to upgrade the Common effluent treatment plant (CETP) at a total cost of Rs 27.26 crore, owners of a majority of the 59 units of tanneries here have been asked to bear the 15 per cent of the amount.

As per the proposal, the Central government, state, and the beneficiaries of the CETP have to pay in the proportions of 70, 15 and 15 per cent, respectively.

But the owners say since their business is in complete doldrums for the past one and a half years because of sealing of their units by the PPCB and export business getting completely shut owing to Covid, they were not in a position to bear this cost. The owners have started demanding that their 15 per cent share should be borne by the state government in view of the severe financial crunch that they have been facing.

The leather industrialists said they have been asked to pay up close to Rs 4.08 crore in four installments each and the average per unit cost coming to each one of them was close to Rs 7 lakh. Amandeep Sandhu, a tanner, said, “Like me, there are many others who are not in a position to bear this extra burden. We have not even been clarified as to how much will be the running cost that all of us might have to pay. The upgrade is only technological as its capacity will remain the same at 5 MLD. The actual need of the industry was to enhance its capacity. We, as the stakeholders, have not even been told as to what exactly is the new technology which is being introduced for water treatment.”

Most unit owners said their drums got operationalised just four months back as they remained sealed for more than a year. The matter pertaining to the leather complex is being monitored by the Punjab and Haryana High Court with Deputy Commissioner Jalandhar supervising the working at the local level along with the senior PPCB officials.

Administrative Officer of the Punjab Effluent Treatment Society (PETS) KC Dogra said as per guidelines, the Government of India is to release funds in four installments and likewise state government and beneficiaries/ industry are to share of 15% each of the total project too in four installments. “All 59 beneficiaries have been asked to deposit the first installment of their share out of four installments. The Department of Promotion of Industry and Internal Trade (DPIIT) will release the first installment only as soon as the industry share is collected and bank account statement is submitted to DPIIT, New Delhi,” he said.

Deputy Commissioner Ghanshyam Thori said the move to strengthen the CETP would be beneficial for the industry as well as for reducing the environmental pollution considerably. The CETP was set up in 2009 and needs to be upgraded according to the new standards which would help to curb the pollution.

‘Government was supposed to bear the cost’

An owner of a tannery unit here, Steven Kler said, "The leather complex was set up in Jalandhar in 1986 and all those who took a plot here were assured at that time that all provisions required for the cluster, including of treatment plant would be given by the government. We were offered 100 per cent subsidy on the use of all common facilities including the CETP. Our units remained shut for 1.5 years because of the government laxity in handling treatment work. When we restarted operations four months back, the industrialists spent over Rs 2 crore from their own pockets for making the CETP functional again and now we are being asked to pay up again, which is not possible at this stage."