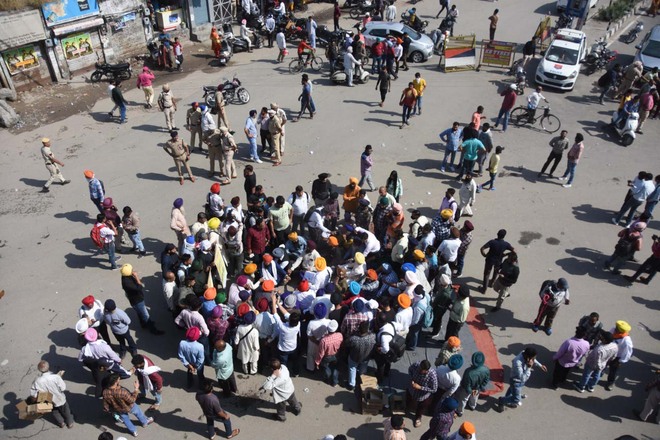 Demanding immediate arrest of the persons who allegedly made derogatory remarks against Guru Nanak Dev, the members of various organisations blocked traffic and sat on a dharna at one of the major intersections — Samrala Chowk — on the NH-44 and NH-95 in the city. The commuters were a harried lot as they were stuck in long traffic jams due to the protest.

The police diverted the traffic through other routes but the commuters still faced a lot of inconvenience as the main intersection of the city remained blocked for around eight hours.

The police had earlier registered an FIR against Anil Arora, who allegedly made derogatory remarks against Guru Nanak Dev and his father. The organisations demanded arrest of Arora and his aides. They also demanded addition of strict sections of the IPC to the FIR against the accused for allegedly hurting religious sentiments and trying to disturb the peace in the state.

Taranjit Singh Nimana of the Bhai Ghanaiya Ji Mission Sewa Society, said, “We gathered here to mark our protest demanding immediate arrest of accused Anil Arora and his aides who passed derogatory remarks against Sri Guru Nanak Dev ji and his father. The ADCP concerned assured us that the action would be taken against the accused at the earliest. We gave 48 hours to the police to arrest the accused who hurt the sentiments of the people and made attempt to cause riots between the communities. Strict sections of the IPC should be added to the FIR.”

“We have not ended the protest but shifted the protest site to the park under the flyover so that the commuters don’t face inconvenience on the roads. If the accused are not arrested within 48 hours, we will be forced to block roads in various parts of the state,” he said.

Preetam Singh Khalsa of the Naujwan Welfare Society said, “Today, people from different religions and communities came forward to participate in the protest seeking immediate arrest of the accused. The accused were trying to disturb peace.”

Due to the protest at Samrala Chowk, long traffic jams were witnessed on Chandigarh Road, Link Road and other roads too. The passengers in a number of buses stuck in the jam due to the protest faced inconvenience. Even a few commuters were seen arguing with some protesters over the blocked roads.

A commuter said, “I have been stuck in the long traffic jam near Samrala Chowk. The roads should not be blocked as there is no fault of commuters. We also demand that the accused, who hurt the religious sentiments, should be arrested and punished as per the law.”