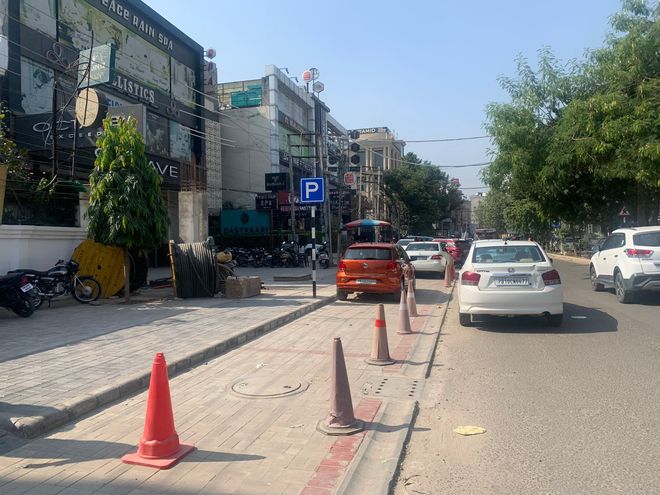 Visitors are facing issues due to inadequate parking space in the Malhar Road area of Ludhiana.

Though the development of Malhar Road as a ‘smart road’ and retrofitting of adjoining Kipps Market in Sarabha Nagar under the ‘Smart City Mission’ are yet to be completed after missing a couple of deadlines, shopkeepers other commercial establishments and visitors to these places have already started facing parking woes due to poor design of the project.

Both Malhar Road and Kipps Market, being high-end commercial centres and located in a posh and affluent area (Sarabha Nagar), have a heavy footfall and were already facing issues due to inadequate parking space.

Now that retrofitting project in Kipps Market was being undertaken and width of Malhar Road had been cut down for laying interlocking tiles on both sides of the road along footpaths, problems of traffic congestion and parking have further aggravated.

To make the matters worse, most of the parking space provided on tiled pavements on both sides of Malhar Road has been encroached upon by owners of showrooms and other commercial complexes by placing traffic cones or even putting a chain fence to deny access of vehicles of shoppers or other visitors.

“How are city residents supposed to visit the ‘smart’ Malhar Road or for that matter Kipps Market if no parking space has been made available at these places,” wonders a city resident, Sukhbir Sekhon, who have had to grapple with parking problem on Malhar Road.

Parking space on Malhar Road was far too inadequate to cope with increased volume of traffic after the road had been transformed as ‘smart road’ and on the other, traffic police were targeting vehicles of customers or at times, even those of the shopkeepers if vehicles were even a shade outside the earmarked spaces, complained a showroom owner on Malhar Road.

MC officials admitted that a couple of projects for providing additional parking space for vehicles were put on hold because selected sites were partly or fully dug up for other ongoing projects. However, no parking project had been planned for Sarabha Nagar or Malhar Road under the ‘Smart City Mission’, admitted an official.

Meanwhile, a senior BJP leader Bikram Singh Sidhu has flayed the MC and the Ludhiana Smart City Limited for faulty design of Kipps Market and Malhar Road redesigning projects while alleging that Rs 38.63 crore had been spent on the development of these two areas. But in reality, the actual blueprint for redesigning the market and having a multi-storey parking, had been completely ignored.