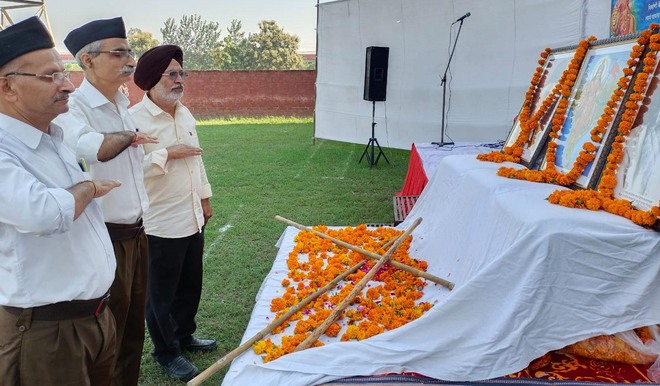 Members of the RSS perform ‘shastra puja’ on the occasion of Dashera in Ludhiana on Friday. Tribune photo

Rashtriya Swayamsewak Sangh (RSS), Ludhiana, today performed ‘shastra puja’ on the occasion of Dasehra at 22 places in the city.

RSS chief Mohan Bhagwat from Nagpur congratulated people of the country on the occasion of Dasehra and for the 400th Parkash Utsav of Guru Teg Bahadur.

“We want a culture that binds the nation and promotes love and nothing more appropriate can be a homage to Guru Teg Bahadur if all religions live in harmony with each other,” he said.

Dasehra holds a special significance for the RSS, as it was founded on this day in 1925.

During the Covid crisis, RSS activists along with social workers from the city contributed towards the welfare of society and in 2024, the RSS would enter its 100th year of formation and the need of the hour was equality should prevail and both country and society should become independent, said a RSS activist from Ludhiana.

“Shastra puja is the ritual we perform every year and this year also it was done. We worship our instruments and weapons during the rituals. It holds special significance as the day marks the victory of good over evil to establish peace,” he said.