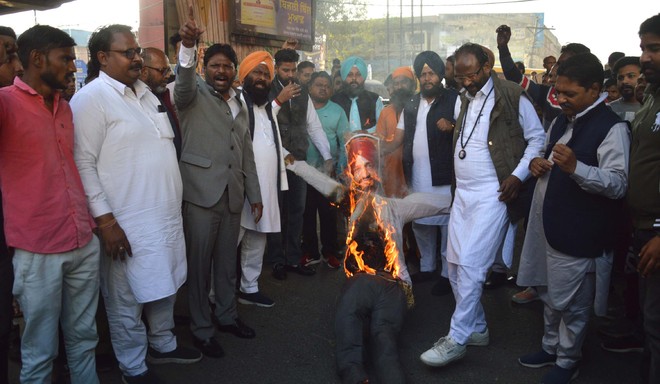 Members of the Municipal Karamchari Dal staged a protest against Chief Minister Charanjit Singh Channi near Clock Tower on Monday. They also raised slogans against the Chief Minister and burnt his effigy to mark their protest.

They were demanding the regularisation of services of contractual safai karamcharis, sewer men and Class IV workers.

The union had planned to carry out a protest march from the MC’s Zone A office to Dana Mandi where Chief Minister Charanjit Singh Channi had to visit today. But, the police had barricaded the way near Clock Tower to stop the protesting union members from moving ahead.

The protesters then sat on a dharna for around 30 minutes near Clock Tower. Meanwhile, commuters were stuck in a traffic jam.

Additional Commissioner, MC, Aaditya Dachalwal then reached the site to meet the protesters. Union members handed over a memorandum (addressed to the Punjab Chief Minister) to the Additional Commissioner. The members demanded that the services of contractual workers should be regularised at the earliest, otherwise they would be forced to intensify the agitation.