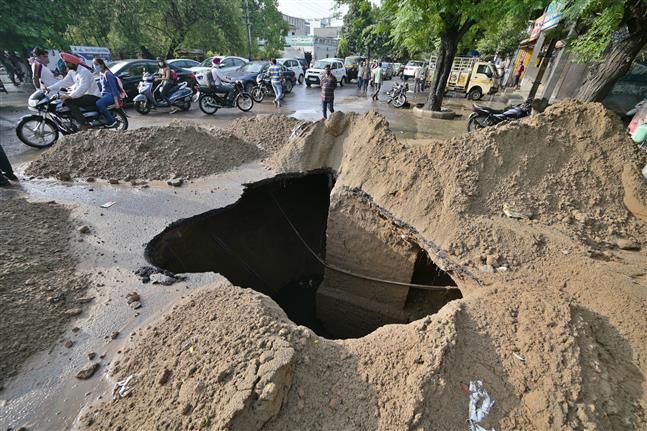 As a big portion of the Ishmeet Singh road caved in near the cremation ground of Model Town Extension, a truck met with a mishap on Thursday. The rear tyres of the truck loaded with soil got stuck in the pit, as per the information. The truck driver is safe, MC officials said.

After the truck was pulled out, the pit was seemingly about 15 feet wide and 15 feet deep. The MC’s old sewer line is passing beneath the road where the incident took place. Some underground wires, said to be of a telecom company, were visible in the pit too.

After the incident, Leader of Opposition in the MC House Harbhajan Singh Dang said the rear portion of the truck had got stuck in the pit. If it would have been a car, it could have fallen inside the pit, he said.

Dang raised questions over the role of the officials concerned. He demanded an inquiry into the matter. He also questioned whether the underground wires were installed with permission or not. “If permission was taken, how much fee was submitted to the civic body. If wires were installed illegally, necessary action should be taken in this matter,” he said.

Superintending Engineer, Municipal Corporation, Ravinder Garg said, “It seems the telecom wires had punctured the sewerage system due to which the incident took place. The truck was later pulled out and the driver was safe.”