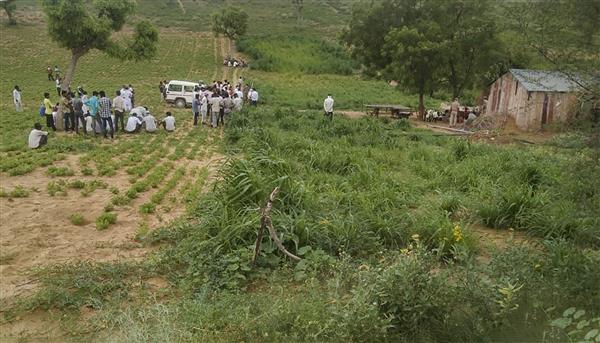 Policemen inspect the site where eleven members of a family of Pakistan Hindu migrants were found dead at a farm, in Jodhpur district. PTI

Autopsies on the 11 Pakistani Hindu migrants found dead at a farm 100 km from here indicated the consumption of a poisonous substance, police said on Monday, pointing at the possibility of a mass suicide.

Police are interrogating some people detained by them, including the estranged wife of the lone survivor in the family.

A note found at the spot alleged threats from the relatives of the wives of two members of the family and harassment by police.

A police official said the post-mortem examination had shown the presence of a poisonous substance in the bodies of the family members, found dead at their shack in Lodta village in Dechu tehsil on Sunday morning.

But the nature of the poison is yet to be determined and police are awaiting a report from the forensic science laboratory, the official said.

The victims, five of them children, were cremated after the post-mortem.

Kewal Ram, 35, told police that he spent the night in the fields, where he had gone to guard the crops, and came home in the morning to find everyone dead.

Based on his complaint, police detained his wife and some other people for interrogation.

A preliminary investigation indicated a dispute between the victims and the families of the wives of two brothers Kewal Ram and Ravi.

“We came to India to save our honour but the same honour is under threat here as well,” the note found at the shack said.

The family came from Pakistan’s Sindh in 2015 on a long-term visa. For the past six months, the family members were living on the farm which they had hired for cultivation.

Police had found chemicals and injection vials at the shack, leading to suspicion that some poisonous substance may have been administered to family.

Two of the victims, Laxmi and Priya, are said to be nurses, according to police. Their signatures appear on the note.

The survivor told police that after dinner with the family he went up to the fence of the farm to keep watch against animals and fell asleep there.

Police said all the bodies were found inside the shack while the beds where the family members intended to sleep were laid outside, the usual practice due to the hot and humid weather.

Other migrants gathered at the hospital where the post mortems were being conducted. They demanded a high-level inquiry.

Hindu Singh Sodha who heads a migrants’ organisation, Seemant Lok Sanghthan, said a high-level inquiry was needed even if it was case of suicide.

He said the local police could not be trusted with the case as they are mentioned in the note, which alleged harassment of the family by them.

The victims included Budharam Bhil (75), his wife Antara Devi, their son Ravi (31) and daughters Jiya (25) and Suman (22). Another 40-year-old woman and five children were also among the dead. — PTI