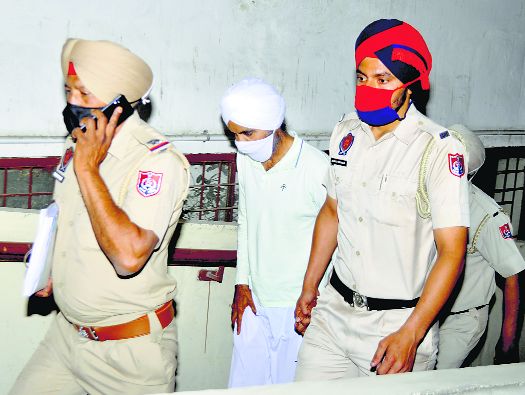 The accused, excise official Pritpal Singh, being produced in a court in Patiala on Thursday. photo: Rajesh Sachar

The death toll in the accident that took place on the day of Holi has now risen to three.

While the 65-year-old ex-serviceman died on the day of the accident, a two-year-old breathed his last on Tuesday evening. The 16-year-old boy, Paramvir Singh Attri, today succumbed while undergoing treatment at the PGI.

The 16-year-old, a resident of Inderpura village on the Patiala-Nabha road, was a student of Class X at DAV School in the city. He is survived by his mother and father and a younger sister. On the fateful day, he was taken to Government Rajindra Hospital and then shifted to a private hospital in the city from where doctors referred him to the PGI on Wednesday.

The boy succumbed to his injuries on Thursday morning.

His uncle Jaswinder Singh said: “Paramvir was a sincere boy. We belong to a family of farmers. He and other youngsters inspired us to hold protests regularly.”

“We are distraught and want the strictest punishment for the driver of the vehicle. Many lives have been lost, but the Centre is not adhering to our demands. They should repeal the laws,” he added.

Ajaib Singh Tiwana, a retired lecturer at a college in Dakala, said they had been holding protests at the site during the evening hours for the past three months. He said he and his wife were standing adjacent to the young boy when the accident took place.

Meanwhile, officials at the mortuary of Government Rajindra Hospital said: “A post-mortem examination was conducted and the body was handed over to the family for cremation in the evening today.”

The police said the accused, Excise And Taxation Inspector Pritpal Singh, has been discharged from the hospital where he was undergoing treatment. Tripuri police station SHO Harry Boparai said: “Pritpal Singh has been arrested. He was produced in a local court and sent to judicial custody.”